Staff of the Fish and Wildlife Health and Crustacean Fisheries groups at the Fish and Wildlife Research Institute (FWRI) conducted an assessment of blue crab (Callinectes sapidus) health in Tampa Bay from September 2006 to August 2007. Researchers designed the project because Tampa Bay blue crab fishers were concerned about diseased blue crabs they were catching and researchers recognized that a comprehensive blue crab health study had never been conducted in Florida.

The Pinellas County Environmental Fund – a partnership among Pinellas County, the National Oceanic and Atmospheric Administration (NOAA) and the National Fish and Wildlife Foundation – provided a one-year research grant to conduct this study. FWRI staff wanted to identify parasites, diseases and toxins in local blue crabs, and provide the public with a blue crab health guide, should similar issues arise in the future. 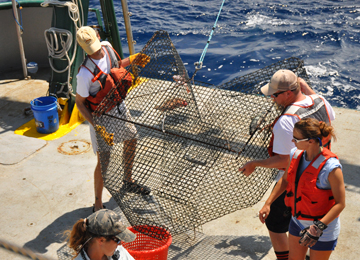 At each station, staff placed five traps baited with striped mullet (Mugil cephalus) approximately 100 yards apart in a line at an average depth of 6 feet (Figure 2). They checked, cleaned and rebaited each trap weekly and collected health survey samples every other week. Researchers also measured water temperature, salinity, dissolved oxygen and pH (acidity) at each station.

Researchers used the first five commercially legal-sized crabs (5 inches from spine tip to spine tip) collected from each trap at each station. Staff graded each crab (i.e., measured shell [carapace] length and width, recorded body weight), determined its gender and noted its shell color and appearance. They drew two hemolymph (blood tissue) samples from the base of one of the crabs' swimming legs. One sample was smeared on agar plates (a Petri dish containing a growth medium) to examine for possible bacterial infections. The other sample was drawn, fixed (preserved) and then placed on ice to be evaluated later in the lab for parasitic infections. Finally, staff conducted necropsies (animal autopsies) of the crabs in the field and examined the internal organs for parasites, noting the color and condition of the organs.

Back at the lab, researchers placed the agar plates with hemolymph samples in an incubator to determine presence or absence of bacterial growth, and if present, identify the bacteria. They also smeared the hemolymph samples onto glass slides and stained them. When viewing the slides under a light microscope, researchers were able to differentiate between host cells (crab blood cells) and parasitic cells (organisms), and investigate the host-parasite relationships.

Quarterly, researchers brought the randomly selected study blue crabs back to the lab for a complete evaluation. In addition to collecting information in the field, staff also removed the major organs to test for toxins and conduct histopathology, which is the scientific study of microscopic changes in diseased tissue. Researchers analyzed 94 blue crabs from the six Tampa Bay locations for toxins. For histopathologic analyses, staff embedded tissues in a plastic resin, sliced them into thin sections, stained them and examined them under a light microscope.

After conducting lab analyses, researchers calculated prevalence, which is the proportion of infected crabs. For example, if 10 of 100 crabs are infected, the prevalence is 10 percent.

Researchers examined 533 live crabs during the survey, with male crabs outnumbering females approximately two to one. This was not surprising since the trap stations were located primarily in the middle and upper bay where male crabs tend to be more abundant than females. Staff determined there was no statistically significant difference between the weights of healthy crabs and those with bacterial or parasitic infections. 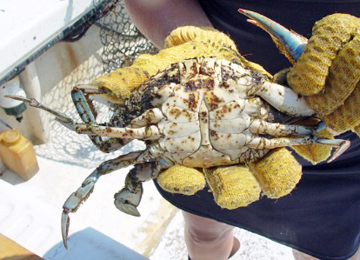 One clearly visible bacterial infection researchers found was shell disease (Figure 3), which is caused when a chitinoclastic bacterium (species unidentified) attacks the crab's shell. In early stages of infection, the bacteria erode the shell, producing brown or black spots. Over time, these spots may become deep lesions. In most cases, shell disease is nonfatal; however, crabs that are heavily infected can become lethargic, weak and often die (Shields and Overstreet 2007). Since this infection only affects the shell, crabs can overcome it when they molt, or shed their old shell and produce a new one. Older crabs, however, do not molt often, and females actually stop molting after they reach maturity. 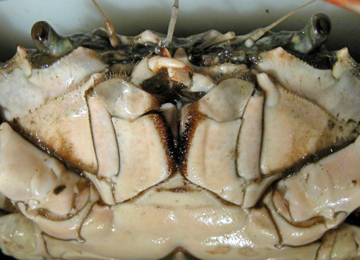 Researchers found several types of parasites in the blue crabs they collected. Staff detected some by observing parasite cells in the crab hemolymph. Some parasites were clearly visible when looking at the crab externally, while others were observed in the crab's internal organs.

One hemolymph-borne parasitic dinoflagellate (single-cell algae) is Hematodinium (Shields and Overstreet 2007). When a crab is heavily infected with Hematodinium, the light-colored portions of its shell may appear chalky and have a pink tinge (Figure 4). Heavily infected individuals become lethargic, stop eating and eventually die.

Hematodinium occurred in all months except August in Tampa Bay blue crabs, and researchers measured an overall prevalence of 18 percent. The highest prevalence occurred in March (40 percent) and April (33 percent). Among stations, prevalence was lowest at Safety Harbor (6 percent) and highest at Fort De Soto’s East Beach (27 percent). 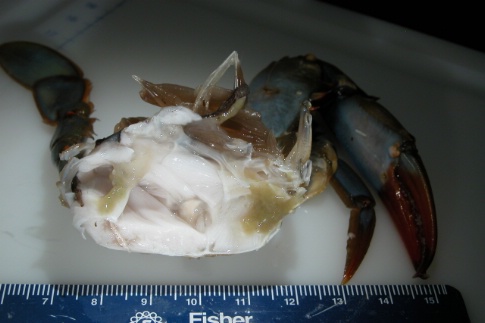 Another parasite researchers observed in blue crab hemolymph and tissue was microsporidia (single-cell organism), which causes the condition "cotton crab." Staff detected microsporidia spores primarily in the skeletal muscle tissue. The presence of microsporidia can affect the color of the muscle (Figure 5), and heavy infections also make the crab lethargic.

Other parasites researchers observed included: gooseneck barnacles and metacercarial trematodes (larval fluke enclosed in a cyst) in the gills; unidentified nematodes (roundworms) on the gill surface; tetraphyllidiean cestodes (tapeworms) in the thoracic ganglion (abdominal nerve cells); metacercarial cysts in the hepatopancreas (liver-like digestive organ); Bonamia-like haplosporidian parasites throughout the hepatopancreas (revealed by histology) and fouling organisms (protozoans Acineta sp. and Epistylis sp.) on the surface of the gill filaments.

Scientists detected saxitoxins and brevetoxins in the hepatopancreas of blue crabs throughout the year. These potent neurotoxins are associated with the dinoflagellates Pyrodinium bahamense and Karenia brevis, respectively, and can accumulate in blue crabs, posing a health risk to humans when contaminated meat is consumed. The amounts detected, however, were very low and not at significant enough concentrations to be a health concern.

Application of our Results

Using the data obtained from this study, staff generated a field pictorial identification guide for several common blue crab disease conditions as an educational tool for fishers and the public. By using this identification guide, people can better identify diseased crabs and notify FWRI researchers of potential outbreaks. Many diseases and parasitic infections in blue crabs are spread by cannibalism, so if you suspect you have caught diseased crabs, disposing of infected crabs onshore may help control the spread of disease.