Reports of discolored and diseased shrimp in the northern Indian River Lagoon in 2005 pointed researchers to the source of infection.

In February 2005, people in the Titusville and Melbourne area began noticing shrimp with a purplish discoloration of the shell and large white visible masses in the flesh, thought to be cysts or tumors. Numerous reports from shrimpers and others prompted an investigation by biologists with the FWC's Fish and Wildlife Research Institute. Some observers sent specimens of affected shrimp from the northern Indian River Lagoon.

By microscopically examining the samples, biologists identified the cause: a parasite called microsporidia, which can affect several species of shrimp. The parasite invades the blood system and tissues surrounding the intestine and multiplies there until it eventually destroys and replaces muscle tissue, creating opaque white patches under the shell. The cottony appearance of the abdomen gives the common name to this disease: "cotton" or "milk" shrimp. Dark discoloration of the shell also occurs when pigmented cells react to the parasite's presence by expanding or increasing in number.

Infected shrimp can become weakened or paralyzed and thus more susceptible to other diseases and predators. In aquacultured shrimp, heavy infections of the parasite in the muscle can render the product unmarketable.

This parasite in shrimp is not considered a risk to human consumers; however, the Florida Department of Health advises common-sense precautions against eating any catch that is obviously weakened by infection. Diseased shrimp should be buried or otherwise disposed of away from the water rather than tossed back. Microsporidia are also known to infect fish, which could be other hosts in the shrimp parasite's life cycle.

Though reports of this disease in Indian River Lagoon shrimp tapered off the following year, reports from shrimpers in the fall of 2010 alerted the FWC to the presence of a nonnative species of shrimp, the tiger prawn, in the area. Researchers encourage the public to report all findings of abnormal shrimp to the FWC's Fish Kill Hotline, 800-636-0511. 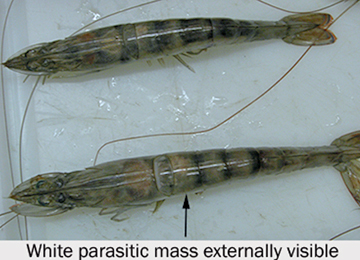 Figure 1: White opaque patches appear under the shell of shrimp infected by microsporidia. 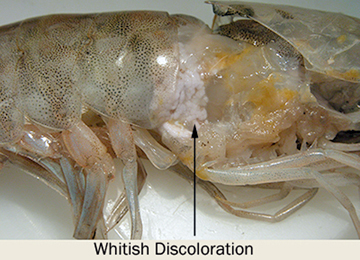 Figure 2: The masses are not tumors or cysts, but hundreds of microscopic parasites. 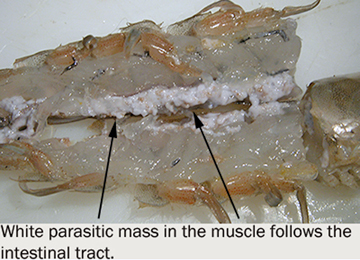 Figure 3: The parasite can invade the muscle tissue and surrounding organs, appearing as white masses.