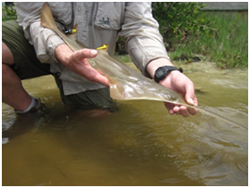 Considered by some to be a symbol of strength and spirituality, the sawfish is culturally important to many tribal societies around the world. Belonging to the family Pristidae, derived from a Greek term meaning saw, sawfish possess a characteristic long, flattened, toothed rostrum, often referred to as the "saw," which is used for feeding and defense against sharks, their only known predators. There are five species of sawfish worldwide.

The only species found in Florida waters is the smalltooth sawfish (Pristis pectinata). It is part of a group of fishes called elasmobranchs that includes all other rays and sharks. This protected species is listed federally under the Endangered Species Act because its population experienced significant decline and range reduction over the last century due to unintentional overfishing and its limited reproductive potential.

To learn more about the ecology and life history of the smalltooth sawfish and monitor its recovery, staff from the Fish and Wildlife Research Institute's Charlotte Harbor Field Laboratory have spent over a decade monitoring and sampling juveniles in the estuaries of the Caloosahatchee River, Peace River and Charlotte Harbor. The project, led by biologist Dr. Gregg Poulakis, began with researchers compiling reports of angler encounters (which is still ongoing) and has evolved into a sampling program that addresses many of the priorities identified in NOAA’s Smalltooth Sawfish Recovery Plan.

Researchers tag each sawfish, which allows them to document the fish’s movements and determine which habitats they use. Researchers also collect a fin clip from each sawfish captured. These small samples have the potential to help scientists answer a variety of questions about the biology and ecology of the smalltooth sawfish. Researchers have already gathered information from these samples on population health, stability, habitat use and feeding biology.

Public participation is an important component of this research project, as reports of sawfish encounters provide a primary data source for determining the historic and current distribution of the population. For example, data provided by the public were instrumental in designating official critical habitat areas for juvenile sawfish – an important step in the recovery process. Members of the public are encouraged to report sawfish captures or sightings by email at Sawfish@MyFWC.com or phone at 941-255-7403. It is important to note that captures or sightings of even one sawfish are useful to the research team.

Through their work so far, Dr. Poulakis and his team have discovered some interesting facts about smalltooth sawfish. They determined that juveniles double in size during their first year, growing from a birth length of 2.5 feet up to 5 feet, and continue to grow relatively fast in their second year. Researchers also determined that sawfish are affected by marine debris, such as discarded fishing line, but can heal quickly if freed from the debris. Data also show that juveniles sometimes occur near specific locations for months, are found in natural creeks and man-made canals, and respond to large increases in river flow by moving downriver.

Dr. Poulakis and his team receive funding from the National Marine Fisheries Service to conduct this research, which addresses the ongoing management needs of multiple agencies and stakeholder groups