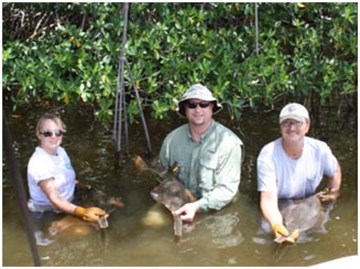 There are five sawfish species worldwide; all are considered critically endangered and poorly studied, but research has increased in the last decade. Sawfishes belong to the family Pristidae, derived from a Greek term meaning "saw." The smalltooth sawfish (Pristis pectinata) is the only sawfish species found in Florida waters. They possess a characteristic long, flattened, toothed rostrum (often referred to as the "saw") and a flattened head and trunk.

The population of smalltooth sawfish in the United States experienced range reduction and declined over the last century. The species was thought to be close to extinction before researchers documented moderate numbers of individuals in Florida in the late 1990s, particularly the south and southwest regions of the state. The smalltooth sawfish has been protected from harvest in Florida since 1992, listed as endangered under the Endangered Species Act since 2003, and protected from international trade since 2007, when it was listed by the Convention on International Trade in Endangered Species of Wild Fauna and Flora (CITES). The smalltooth sawfish is listed on CITES Appendix I which prevents all international trade. If a smalltooth sawfish is accidentally caught, it must be promptly released unharmed. Researchers encourage anglers and boaters to Report Sawfish Sightings for Science.

Historically, the smalltooth sawfish inhabited the western Atlantic Ocean from New York (rarely) to central Brazil, including the Gulf of Mexico, and the eastern Atlantic along the central west coast of Africa. The species was once common on both Florida coasts, especially in the late 1800s and early 1900s. In the late 1800s, a fisherman on the east coast reported capturing 300 sawfish in the Indian River Lagoon during one season. Others reported seeing hundreds of small and large sawfish along the west coast of the peninsula. When commercial netting was more prevalent, fishers often accidentally caught sawfish because the rostrum (saw) can easily become entangled in nets. Recreational anglers targeting other species also caught sawfish. Like other rays and sharks, smalltooth sawfish also have limited reproductive potential. These factors contributed to its population reduction.

The smalltooth sawfish is no longer found throughout its full historical range but is still a year-round resident of peninsular Florida, with most encounters occurring in southwest Florida from Charlotte Harbor to the Florida Keys. Smaller individuals from 3 to 6 feet (1 to 1.8 meters) total length typically live close to shore near river mouths or tidal creeks, while larger smalltooth sawfish up to 18 feet (5.5 meters) typically inhabit deeper offshore waters.

Biologists still have a lot to learn about smalltooth sawfish biology and ecology, but research conducted over the last two decades has improved our understanding of the species. Smalltooth sawfish can grow very large, up to 17 feet (5.2 meters) long and 700 pounds (315 kilograms). They have 21 to 30 unpaired teeth on each side of the rostrum (saw); males typically have more rostral teeth than females. If completely lost, the teeth are not replaced; if teeth are only chipped and their bases are intact, they will continue to grow as the animal grows. Smalltooth sawfish of all sizes feed primarily on fishes such as mullet and rays, using the rostrum (saw) to slash through schools of fish, stunning them before they are consumed.

Like other rays and sharks, sawfish take several years to reach maturity and are long-lived. Biologists are not certain of the size of smalltooth sawfish at maturity, but males appear to mature around 11 feet long (3.4 m) and females likely reach maturity at larger sizes—around 12 feet long (3.8 m). Females reproduce every other year and return to the same nurseries to give birth. Like other rays and sharks, smalltooth sawfish have internal fertilization, and embryos grow inside the mother until they are born alive. Biologists estimate the length of the smalltooth sawfish’s gestation period to be 12 months.

Smalltooth sawfish in Florida waters give birth primarily in April and May. Females can give birth to approximately 7–14 young measuring 2 to 2.7 feet (0.6 to 0.8 meters) long. Prior to birth, the calcified teeth on the rostrum (saw) are covered in tissue to prevent injury to siblings and the mother. The tissue covering the teeth completely disappears about two weeks after birth so the young sawfish can feed effectively and defend themselves.

Juvenile smalltooth sawfish most often inhabit brackish water within a mile of land. They can be found in a wide range of habitats, including mud bottoms, sand bottoms, oyster bars, red mangrove shorelines, seawall-lined canals, and near piers. Juveniles will also travel many miles up rivers if freshwater inflow is reduced. Sawfish use some portions of their nurseries, called nursery hotspots, for months at a time, and researchers have observed movement between these hotspots when environmental conditions such as changes in river flow cause them to relocate within the nursery.

Large smalltooth sawfish, longer than 10 feet (3 meters), are occasionally found near shore in the spring when most sawfish are born and mating is thought to occur, but most are reported in deeper coastal waters with muddy bottoms.

Fish and Wildlife Research Institute biologists are trying to determine what habitats smalltooth sawfish use, how long they use them, and if habitat use patterns are similar in different areas of the species’ current range. Anglers and boaters are encouraged to help with this research by reporting smalltooth sawfish encounters to Report Sawfish Sightings for Science.