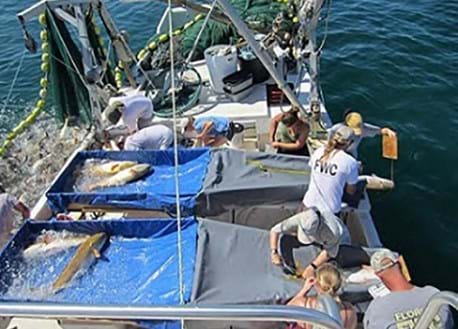 A team of 10 biologists and three commercial fishermen work together to capture and process over 1,000 live adult redfish on the deck of the commercial purse boat. Each fish is quickly measured, assessed for gender, and a small section of tail fin is removed for genetic analysis before being released alive.

Thousands of adult red drum (Sciaenops ocellatus) gather in nearshore Gulf of Mexico waters during their September-November spawning season, often creating a golden vortex on the surface. Tides carry the offspring into an estuary where fish spend their first few years and are heavily targeted by anglers. Around the age of sexual maturity (3-6 years) which typically coincides with their matriculation out of the 27” slot limit, fish leave the estuary and join the spawning stock.

When blackened redfish became the craze in the 1980s, the red drum aggregations made it easy to catch huge numbers of adults in purse seines, causing concern for the sustainability of red drum populations and leading to the closure of red drum harvesting in federal waters in the Gulf. Ironically, because the population assessment of marine fish stocks typically depends on commercial landings data, this led to a new problem: The Gulf of Mexico Fisheries Management Council (GMFMC) did not have the data needed to evaluate the status of red drum populations. To address this problem, Dr. Sue Lowerre-Barbieri and team initiated a 3 year study in 2012 which integrates traditional fishing methods (spotter planes and purse seines) with emerging scientific techniques (acoustic telemetry and genetic analysis) to estimate the red drum spawning population size in the Eastern Gulf of Mexico as well as determine habitat use and site fidelity associated with reproduction. 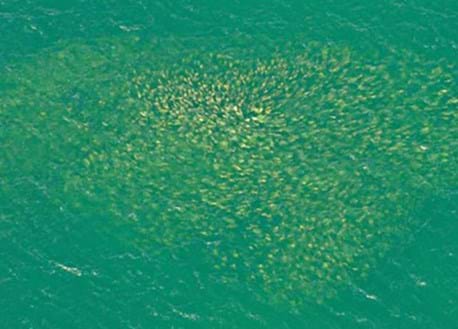 A spotter plane is essential in locating aggregations of adult redfish such as this one off Tampa Bay. Although the aggregation is obvious from 700 feet in the air, these fish can be difficult to spot from the water.

Researchers conducted aerial surveys from Tampa Bay to Charlotte Harbor during the three spawning seasons to identify red drum aggregation locations. Working cooperatively with local commercial purse seine fishermen and a spotter plane, biologists caught, sampled, and released thousands of fish. Large sample sizes were needed to genetically characterize many individual fish for recapture rates and calculate population size. The fish were also measured for length, assessed for gender, and females had samples taken of their ovaries so that reproductive state could be determined. All red drum were then released.

One hundred of these captured red drum were implanted with acoustic tags (which emit sounds that are detected by underwater receivers) to track fish movements associated with spawning in nearshore waters between Tampa Bay and Charlotte Harbor. Researchers deployed 88 underwater receivers to monitor these fish, recording the date and time that a tagged fish swam within range of the receiver (400m) and the depth it was at and temperature of the water, allowing scientists to better understand individual spawning behavior. An additional 40 red drum captured inshore within estuarine nursery habitats of both Tampa Bay and Charlotte Harbor were implanted with tags to determine estuarine differences in recruitment to offshore spawning populations at both temporal and spatial scales.

The research showed red drum aggregations occur in nearshore waters in August and can continue through mid-November. The number of aggregations varied annually: in 2012, 6 aggregations were observed, in 2013 there were 17 sighted, and in 2014, 6 aggregations. No aggregations were sighted off Charlotte Harbor during the 2012 sampling season, possibly due to a red tide occurrence. In 2013 and 2014 aggregations were detected throughout most of the coastal area surveyed. Scientists took biological and genetic samples from 1,800 fish in 2012 (three aggregations), 3,400 fish in 2013 (six aggregations), and 3,781 fish in 2014 (5 aggregations). Acoustic telemetry data indicated that most fish use a range larger than the area between Tampa Bay and Charlotte Harbor. Spawning site fidelity was relatively high, with 60 percent of the fish detected in 2012 returning to the Tampa Bay spawning site in 2013 Acoustic data is currently being analyzed for fine scale behavior patterns associated with spawning as well as site fidelity in 2014 and 2015.   This data will be integrated with the genetic tag/recapture data to estimate spawning population size.