Many traps used in this fishery are lost annually due to storms and boat propellers cutting the buoy rope that marks each trap. Wooden slats of lobster traps decay in a few years, while concrete, rope and buoys can remain for decades. Trap debris such as buoys and rope are commonly found on shorelines, while lost traps and rope are one of the most prevalent types of debris underwater in the Florida Keys. 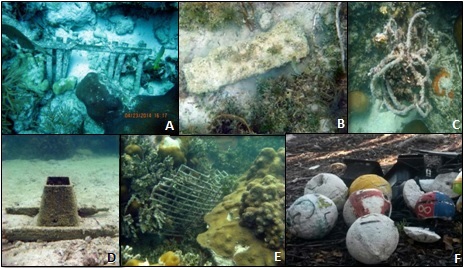 All lobster traps have wood panels designed to decay to prevent lost traps from ghost fishing, but traps have other parts that also become debris. FWC divers were able to estimate how much each part of a trap contributes to underwater trap debris:

Lost wooden lobster traps can ghost fish for about one year, while trap rope and wire lobster traps can persist for much longer. Lost traps can damage critical benthic habitats such as coral and seagrass. Traps may rest on these habitats or be moved there by wind. Lost trap rope can entangle and harm corals, sponges, dolphins, manatees and sea turtles. Trap loss is also an economic concern for fishermen. When traps become lost, fishermen lose the cost of the gear and the value of future catch.

How You Can Help