Facts About Horseshoe Crabs and FAQ

The American horseshoe crab is a common sight on Florida's beaches. Horseshoe crabs are “living fossils” meaning they have existed nearly unchanged for at least 445 million years, well before even dinosaurs existed.

Horseshoe crabs are not actually crabs at all, they are much more closely related to spiders and other arachnids than they are to crabs or lobsters!

There are four species of horseshoe crabs still around today. Only one species, Limulus polyphemus, is found in North America along the Atlantic and Gulf coasts from Maine to Mexico. The other three species are found in Southeast Asia. 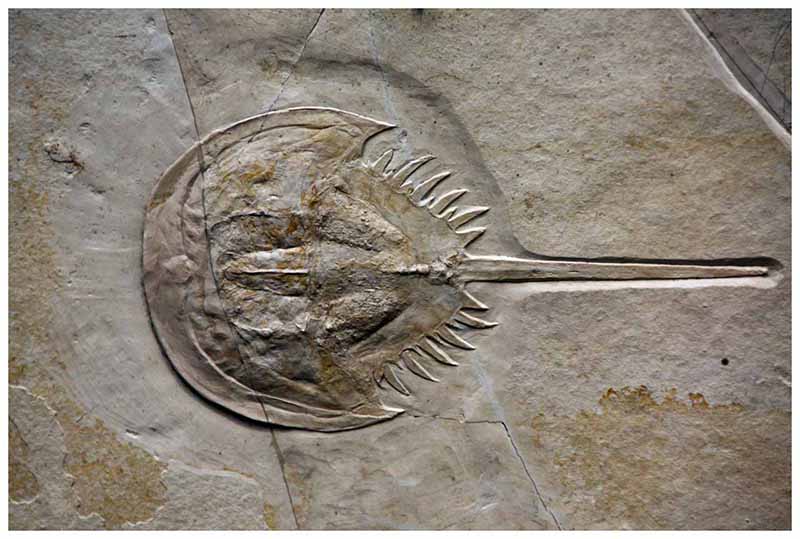 Despite existing for hundreds of millions of years, horseshoe crabs are nearly identical to their ancient relatives. This is because their body structure is extremely effective for survival, think, “if it ain’t broke, don’t fix it!”

Though the horseshoe crab's shell is hard, it is very sensitive to the world around it.  The crabs are especially sensitive to light. They have 10 eyes, a pair of compound eyes on the prosoma, and "photo receptors" in other areas, primarily along the tail.

*Never pick up a horseshoe crab by its tail, as it can harm the animal.  Instead, gently pick it up by both sides of the prosoma using both hands. 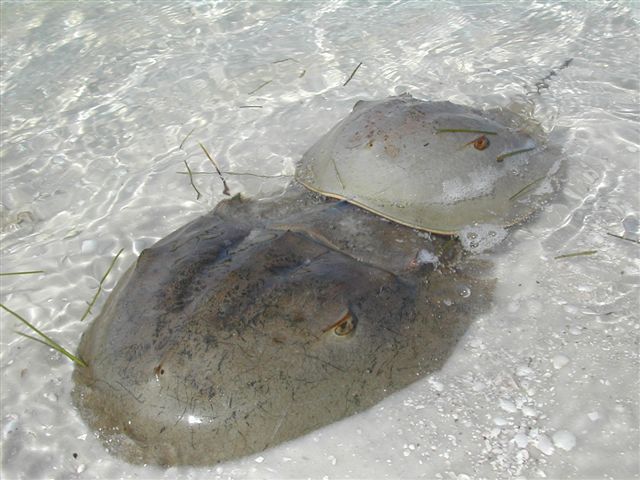 When mating, the smaller male crab hooks himself to the top of the larger female’s shell by using his specialized front claws, and together they crawl to the beach. The male fertilizes the eggs as the female lays them in a nest in the sand.

Some males (called satellite males) do not attach to females but still have success in fertilizing the female's eggs by hanging around the attached pair. Most nesting activity takes place during high tides around the time of a new or full moon.

Horseshoe crab larvae emerge from their nests several weeks after the eggs are laid. Juvenile horseshoe crabs look a lot like adults except that their tails are smaller. The young and adult horseshoe crabs spend most of their time on the sandy bottoms of inter-tidal flats or zones above the low tide mark and feed on various invertebrates.

Why are horseshoe crabs important?

Horseshoe crabs are an important part of the ecology of coastal communities. Their eggs are the major food source for shorebirds migrating north, including the federally-threatened red knot. These shorebirds have evolved to time their migrations to coincide with peak horseshoe crab spawning activity, especially in the Delaware and Chesapeake Bay areas. They use these horseshoe crab beaches as a gas station, to fuel up and continue their journey. 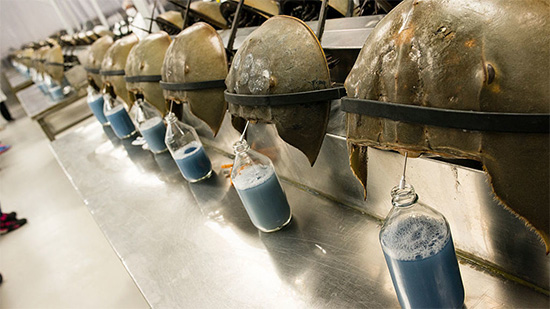 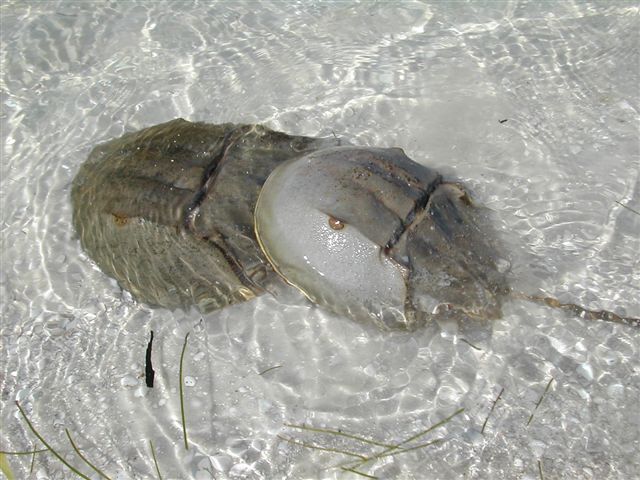 This compound coagulates or clumps up in the presence of small amounts of bacterial toxins and is used to test for sterility of medical equipment and virtually all injectable drugs. That way, when you get a vaccine you know it hasn’t been contaminated by any bacteria.  Anyone who has had an injection, vaccination, or surgery has benefited from horseshoe crabs! Additionally, research on the amazing and complex compound eyes of horseshoe crabs has led to a better understanding of human vision.

Horseshoe crabs are also used in several fisheries.  The marine life fishery collects live horseshoe crabs for resale as pets in aquariums, research subjects, or as educational specimens, and  both the American eel and whelk fisheries use horseshoe crabs as bait along many parts of the Atlantic coast.

Threats to horseshoe crabs and research efforts
Horseshoe crab numbers are declining throughout much of their range. In 1998, The Atlantic States Marine Fisheries Commission developed a Horseshoe Crab Fishery Management Plan that requires all Atlantic coastal states to identify horseshoe crab nesting beaches. Currently, with the help of the public, biologists at the Fish and Wildlife Research Institute are documenting nesting sites of horseshoe crabs throughout the state. If you see horseshoe crabs mating and would like to report a sighting, please visit the Report Sightings page for more information.

No, horseshoe crabs are in a class by themselves; they are more closely related to spiders, scorpions, and ticks. They are different from true crabs because they have no antennae and no mandibles (mouth parts for grinding food). Like spiders, they have a pair of chelicerae (small appendages for moving food into the mouth).

Yes and no, that idea comes from the fact that 445 million years ago, ancestors of horseshoe crabs were abundant. The anatomy of the species we have today is not much changed from those older forms. The life span of an individual horseshoe crab is not millions of years, but they can live up to 20 years!

No! Horseshoe crabs do not bite or sting. Despite the ferocious look of the tail, it is not used as a weapon. Instead, horseshoe crabs use their tails for righting themselves if they are flipped over by a wave. They do have spines along the edge of their carapace, so if you must handle them, be careful and pick them up by the sides of the shell, not the tail.

The are not picky eaters, they eat almost anything. They feed on small clams, crustaceans, and worms; however, they will also eat other animals and even algae. Because they have no mandibles or teeth, they crush hard food between their legs before passing it to their mouth. Like birds, horseshoe crabs also have gizzards for grinding food before it reaches their stomachs.

Only horseshoe crabs have a blood-clotting agent known as Limulus Amebocyte Lysate, or LAL, which clots in the presence of certain groups of bacteria. These bacteria are difficult to detect by other means. The FDA requires the use of LAL to test all injectable and intravenous drugs produced in the U.S. The good news is that up to one-third of a horseshoe crab's blood can be removed without killing the animal.

Horseshoe crabs commonly get overturned by high wave action during spawning and may not be able to right themselves.  Often this leads to the death of the animal (you can help them by gently picking them up from both sides of the shell and releasing them back into the water.)  Other observers have mistaken horseshoe crab molts for dead crabs. Like all arthropods (including crustaceans and insects), horseshoe crabs have a hard exoskeleton (shell) on the outside of their body. To grow, the crab must shed its old exoskeleton and form a new, bigger one. Unlike true crabs, which back out of their old exoskeletons, horseshoe crabs push forward, leaving their molts behind them, leaving a split in the front.