What forms of nutrients can Karenia brevis use to grow and bloom? 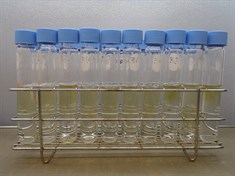 We need nutrients and so do algae. The major nutrients that algae use for growth are nitrogen (N) and phosphorus (P). They also use minerals and vitamins in smaller amounts.  Understanding the types of nutrients which harmful algae use to grow can help develop strategies for mitigating blooms. Florida Fish and Wildlife Conservation Commission (FWC) researcher, Dr. Bill Richardson, recently completed experiments designed to test the types of phosphorus that could be used by the red tide organism, Karenia brevis.

Algae get P from dissolved compounds in the water. There are many different kinds of P-containing compounds dissolved in the sea, largely as the result of the natural decomposition of organisms, as well as from fertilizers and sewage. Among the explanations considered for the large and long-lasting blooms of the Florida red tide organism in the Gulf of Mexico include its ability to use a diversity of P-containing compounds and maybe even some compounds that other algae cannot use.

These results suggest that large blooms of Karenia on the west Florida shelf are not the result of exceptional growth or the exclusive use of any specific inorganic or organic P compound. Instead, Karenia grows successfully on a broad spectrum of naturally occurring P compounds, either by taking P up directly or by taking it up indirectly after bacteria recycle it.