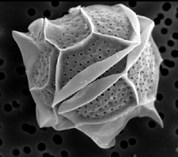 There are two documented varieties of P. bahamense - one that is generally found in the Pacific Ocean and another in the Atlantic Ocean and Gulf of Mexico. The latter, P. bahamense var. bahamense, is the variety we see in Florida. It has been studied less than the Pacific variety, in part because it was previously not known to be toxic. However, in 2002 scientists confirmed it can produce saxitoxins much like its Pacific counterpart.

Because toxic Pyrodinium blooms can contaminate fish and shellfish and threaten public health, the FWC leads routine monitoring programs for P. bahamense in Tampa Bay and the Indian River Lagoon, the systems in which annual blooms occur. Scientists at the FWC are also working to identify the environmental factors that trigger blooms in Florida and influence their duration, intensity and toxicity. A better understanding of blooms will help scientists develop models to predict future blooms.

As part of its life cycle, Pyrodinum bahamense forms seed-like cysts, which drop to the seafloor where they overwinter until they are ready to germinate - when optimal conditions arise. Much like with terrestrial plants, successful germination of P. bahamense cysts may determine the timing and intensity of blooms each year. We are currently conducting research to identify the environmental conditions that trigger germination of P. bahamense resting cysts.