HAB Monitoring Database
The Florida Fish and Wildlife Conservation Commission's Fish and Wildlife Research Institute (FWRI) harmful algal bloom (HAB) database documents Karenia brevis red tides from 1954 to the present – one of longest continually recorded dataset of red tide. The database contains more than 125,000 records provided by more than 190 state and county agencies, private research institutions, universities, and FWC staff. Data include location coordinates, cell counts of Karenia brevis and other HAB species, and a variety of water quality measurements such as temperature, salinity and dissolved oxygen. The database is continually updated and data are routinely provided to FWC scientists, other researchers and the public. To request data, email: HABdata@MyFWC.com.

Event Response Monitoring and Sampling Effort
The majority of historical data stored in the database have been collected in response to blooms: to monitor shellfish harvesting areas or the extent of a bloom. These data are different from those found in many other long-term datasets because sampling efforts have varied with the extent and duration of blooms, as well as with state funding (Figure 1). In addition, since the mid 1990s, sampling efforts have increased substantially, with three times as many samples collected compared to early years, and this has resulted in the detection of more blooms (Table 1). Because of the variability in event response efforts and changes in sampling effort over time, scientists cannot use the data to determine if red tides have increased in frequency or severity in the past 60 years. Statisticians Christman and Young assessed how the database could be used and summarized the utility, as well as limitations, of the database in this executive report. Despite the limitations of the database, historical data can be used to determine geographical areas affected, movement of red tide from offshore to inshore, and movement alongshore.  In some cases, the red tide data can be combined with other data sets such as salinity, temperature, winds, currents, hurricane paths, and even mortalities and morbidities of aquatic organisms to look at patterns.

Routine Monitoring
Analysis of the historical database provided recommendations for establishing a more comprehensive sampling program. To analyze long-term trends, data must be collected consistently with similar sampling locations and time intervals to gain a better understanding of baseline conditions and to study change over time. Such routine monitoring data can now be found in the HAB Monitoring Database. Prior to 1998, 80 percent of samples taken were surface samples collected inshore as opposed to varying depths or offshore sampling, resulting in an immediate and obvious bias. After 1998, programs such as the five-year, federally-funded Ecology and Oceanography of Harmful Algal Blooms (ECOHAB) Florida program monitored more than 70 inshore and offshore stations monthly, resulting in consistent sampling locations and time intervals and a better understanding of K. brevis blooms. Currently, many routine samples are collected throughout the southwest Florida gulf.

Table 1. Over 100 Years of Red Tides off Florida's West Coast 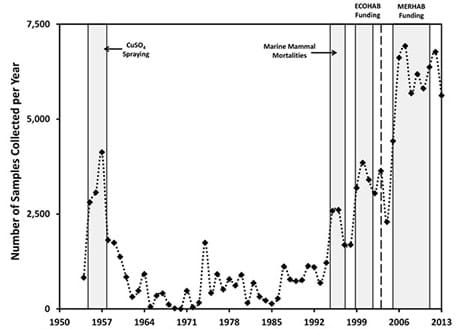 Figure 1. The graph shows sampling efforts between 1954-2013. Sampling efforts have varied with the extent and duration of blooms, and with funding, resulting in peaks and dips in sampling efforts since the mid 1950s. Since the mid 1990s sampling efforts have increased substantially with three times as many samples collected compared to earlier years, resulting in the detection of more blooms as shown in Table 1. Due to the variability in event response efforts and changes in sampling effort over time, scientists cannot use the data to determine if red tides have increased in frequency or severity in the past 60 years. The points represent the number of samples collected each year, while the dotted line illustrates trends in sampling effort. The gray shading indicates increased water sampling. The dashed line indicates the reestablishment of the FWC’s Red Tide Offshore Monitoring Program, for which volunteers collect samples for red tide analysis by FWC staff. Spikes in sampling effort correspond with copper sulfate spraying in the 1950s, marine mammal mortalities in the 1990s, and increased funding from federal sources during the last two decades.