Puffer Fish Toxicity (2002-2004)
Between January 2002 and May 2004, 28 people in Florida, New Jersey, Virginia, and New York became ill from Saxitoxin Puffer Fish Poisoning. Researchers traced saxitoxin exposure to three puffer fish species: southern (Sphoeroides nephelus), checkered (S. testudineus), and bandtail (S. spengleri) from Florida's Indian River Lagoon (IRL), which spans more than 137 miles of the east coast of Florida and supports commercial and recreational clam and oyster beds. Puffer Fish Poisoning is generally caused by the consumption of the neutoxic tetrodotoxins found naturally in puffer fish. However, this series of cases was the first report of Puffer Fish Poisoning related to saxitoxin exposure of the dinoflagellate Pyrodinium bahamense in the western Atlantic United States. In 2004, due to the public health threat resulting from the toxicity of puffer fish fillets, FWC imposed a permanent ban on the harvest of puffer fish from the IRL.

Monitoring Shellfish and Water (2003-present)
Saxitoxins were also found in shellfish from the IRL during 2003. To prevent Paralytic Shellfish Poisoning (PSP), the Florida Department of Agriculture and Consumer Services (FDACS) and FWC established the PSP Biotoxin Contingency Program in April 2003 to monitor water for P. bahamense and shellfish for saxitoxin. Since this time, FDACS has collected water samples monthly and shellfish samples seasonally from the shellfish harvesting areas in Brevard County. FDACS sends these samples to the Harmful Algal Bloom (HAB) group at FWC for analysis. Managers at FDACS then use the results provided to regulate shellfish bed closures and openings. When P. bahamense is present, sample collections are performed weekly and collection sites are expanded to the north and south. 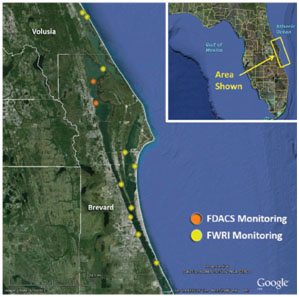 As of 2013, FDACS had ordered 39 closures of shellfish harvesting areas.  Closures occur when the shellfish saxitoxin levels equal or exceed the international standard action level of 80 micrograms per 100 grams or when a positive result on the qualitative Jellett Rapid Test (Jellett Rapid Testing Ltd., Nova Scotia, Canada) occurs based on screening standards from the Interstate Shellfish Sanitation Conference (ISSC).  As a result of the PSP Biotoxin Contingency Program, there have been no documented cases of PSP illnesses in Florida. This vital monitoring program provides an early warning of bloom occurrences and minimizes the risk of human exposure to saxitoxin toxicity. 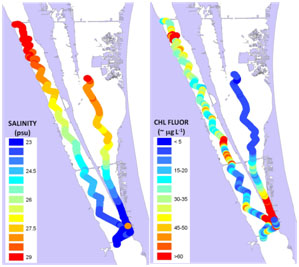 FWC provides surface mapping of blooms to partners and collaborates with the St. Johns River Water Management District and University of Florida to monitor the IRL for algal bloom species other than P. bahamense. In this effort, the Red Tide Offshore Monitoring Program has played a vital role in increasing sampling coverage. During 2013, for example, seven volunteers assisted in monitored the Indian River, Banana River and Mosquito Lagoon by collecting water samples. These include volunteers from the Marine Resource Council who collect weekly, and private citizen volunteers  who collect monthly. Due to the diligence and hard work of these volunteers, FWC has been able to identify and monitor a variety of algal blooms, including Peridinium quinquecorne, Takayama tasmanica, Aureoumbra labunensis, and Protoperidinium species.