Taxonomy, the science of identification and classification, is a dynamic discipline in which conclusions change as advances in technology result in new information. Taxonomists revise species descriptions and classifications as improved techniques enable them to identify or clarify significant characteristics. Assigning Florida's red tide organism to the correct taxonomic category is especially important because the toxic dinoflagellate can produce algal blooms with harmful effects on public health and marine resources. The need to reclassify it has been recognized since 1979.

The genus Karenia was established in November 2000 by Gert Hansen and Øjvind Moestrup of the University of Copenhagen (Daugbjerg et al. 2000) to honor Dr. Karen Steidinger of the Fish and Wildlife Research Institute (FWRI). The type species for the genus is Florida's red tide organism, Karenia brevis (Davis) G. Hansen & Moestrup. Ptychodiscus brevis (Davis) Steidinger 1979 and Gymnodinium breve Davis 1948 are two prior names for K. brevis.

1948: Gymnodinium brevis was named by Charles C. Davis from cells collected during a red tide event in Florida in 1946-1947. The name was later corrected to Gymnodinium breve so the genus and species names would agree. Gymnodinium is neuter and brevis can be either masculine or feminine. Therefore, the species epithet "brevis" was changed to "breve", which is neuter, to fit the genus name.

1979: Steidinger (1979) transferred the species to Ptychodiscus because of the prominent apical carina, cingular thecal ridges, and a resistant cell covering. In addition, the ultrastructure of the cell covering did not agree with that of G. fuscum, the type species for the genus Gymnodinium.

1989: At the 4th International Conference on Toxic Marine Phytoplankton, held June 26-30, 1989, in Lund, Sweden, several papers were presented on gymnodinioids, including what was then termed G. breve (Graneli et al. 1990). Participants at the conference agreed that the original name, Gymnodinium breve, would be used until the type species of Gymnodinium, Gyrodinium, Balechina, and Ptychodiscus were investigated further to adequately characterize morphology, ultrastructure, biochemistry, and other variables. This same consensus had been reached two weeks earlier at the Taxonomy and Biology of Dinoflagellates and Other Harmful Phytoplankton Workshop, held June 9-13 at Sherkin Island Marine Laboratory in County Cork, Ireland. At both the Sherkin Island workshop and the Lund conference, Steidinger (1990) suggested the use of pigments and apical grooves as diagnostic characters for the gymnodinioids that contain fucoxanthin-derived pigments. In a paper published the same year as the Lund conference, Steidinger et al. (1989) described the use of conservative morphological characters, such as the apical groove and sulcal intrusion, to separate the related species within the Gymnodinium/Gyrodinium genera.

2000: Evidence for the new genus and species based on morphology, ultrastructure, thecal polysaccharides, pigments, toxins, and rDNA molecular analyses was presented at the IXth International Conference on Harmful Algal Blooms, held February 7-11, 2000, in Hobart, Tasmania, Australia. The title of the talk was "Evidence for a New Genus Within the Gymnodiniales from Different Datasets" by A.J. Haywood, K.A. Steidinger, E.W. Truby, G. Kirkpatrick, T. Suzuki, I. Garthwaite, and L. Mackenzie.

Early in 2000, Danish scientists Gert Hansen and Øjvind Moestrup were also working on what was known as Gymnodinium mikimotoi and Gyrodinium aureolum. Based on their studies of the organisms, they came to a similar conclusion about the need for a new genus. The genus Karenia was established the following November by Hansen and Moestrup (Daugbjerg et al. 2000). The classification was based on the cell's fucoxanthin-derived pigments (19'-hexanoyl-oxyfucoxanthin and/or 19'-butanoyl-oxyfucoxanthin), a straight apical groove (unlike Gymnodinium's), and the absence of a nuclear capsule or envelope chambers. In contrast, Gymnodinium F. Stein emend. G. Hansen & Moestrup is characterized by a counterclockwise, horseshoe-shaped apical groove and has a nuclear envelope with vesicular chambers (Daugbjerg et al. 2000, Hansen et al. 2000). The type species for Gymnodinium is G. fuscum (Ehrenberg) F. Stein. The genus Gyrodinium Kofoid & Swezy emend. G. Hansen & Moestrup is characterized by an elliptical apical groove and a cell covering with longitudinal striae; its type species is G. spirale (Bergh) Kofoid & Swezy.

Amazingly, K. brevis isolated as a clonal culture from Johns Pass, Florida, in 1953 by William B. Wilson remains viable today, and its rDNA has been sequenced. This sequence and the sequences for isolates from 1996 are available through GenBank, a national resource for all publicly available DNA sequences. The 1953 and 1996 isolates are the same, and both are from Florida waters.

Additions to the genus Karenia are likely as taxonomic investigations continue and as other species are more accurately characterized. Proper identification and classification are important to help assess potential risks associated with an algal bloom.

Daugbjerg, N., Hansen, G., Larsen, J., and Moestrup, Ø. 2000. Phylogeny of some of the major genera of dinoflagellates based on ultrastructure and partial LSU rDNA sequence data, including the erection of three new genera of unarmoured dinoflagellates. Phycologia 39(4):302-317. 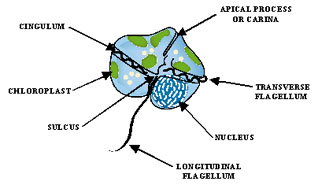 apical groove
A groove located at the anterior part of the cell extending posteriorly on both the ventral and dorsal sides. On the ventral side, it does not go any further than the sulcus.

apical process/carina
The anterior overhanging process of K. brevis that is ventrally directed on a K. brevis cell. In most armored dinoflagellates, this structure is a hole at the top of cell.

chloroplast
The cellular organelle that contains chlorophyll and where photosynthesis takes place.

cingulum (also called the girdle or transverse groove)
A furrow encircling the cell.

longitudinal flagellum
The whiplike tail protruding from the sulcus. This tail acts like a rudder and steers the cell.

neuter
Neither feminine nor masculine.

sulcus
The longitudinal area on the ventral surface of the cell that forms a somewhat pronounced furrow or depression that houses the longitudinal flagellum.

transverse flagellum
The ribbonlike tail encircling the cell within the cingulum. When beating, this propels the cell.

ultrastructure
Refers to the fine internal morphology of the cell.

vesicle
Polygonal structures that are membrane bound and usually compressed against one another in the cell covering (theca) or in the cytoplasm. 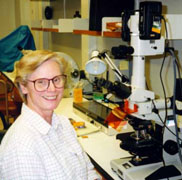 Dr. Steidinger's experience is in dinoflagellate taxonomy, life cycles, and ecology, particularly with regard to toxic species and the management of shellfish resources. Her interests are the dynamics of harmful algal blooms and how life cycle strategies and species adaptations allow certain dinoflagellates to exploit their environment on temporal-spatial scales. Other interests include working toward the development of management options for harmful algal blooms and for reducing their risk to humans and living marine resources.