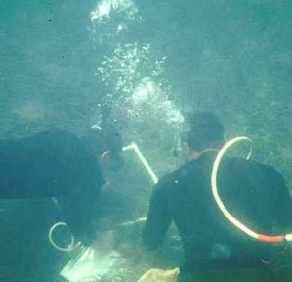 In the late 1990s, researchers with the Fish and Wildlife Research Institute (FWRI) conducted a study to determine the easiest and most cost-effective way to assess the health of turtle grass (Thalassia testudinum) beds. The project was a success and helped researchers develop the methods and framework for a statewide seagrass monitoring effort – the Seagrass Integrated Mapping and Monitoring (SIMM) Program.

From 1997 to 1999, FWRI scientists, along with partners from other institutions, evaluated turtle grass beds at nine regions in the Gulf of Mexico from the Chandeleur Islands in Mississippi to the Florida Keys. They measured the density, size and weight of turtle grass shoots at several sites in each region, as well as the amount of nitrogen and phosphorus stored in seagrass blades and the amount of carbohydrates stored in belowground tissues, or rhizomes. Researchers also measured the concentrations of the stable isotopes C-13 (carbon) and N-15 (nitrogen) in seagrass blades to determine the sources of carbon and nitrogen available to the plants.

Based on the study results, researchers determined the easiest and most cost-effective way to assess the health of seagrass beds is mapping the area of seagrass beds and measuring the density of plants within the beds at least once a year. With two or more years of data, researchers can identify and report trends in the health of seagrass beds. Other methods, such as measuring nutrient and carbohydrate content of plant tissues, provide useful information but are costly and require specialized techniques.

The study coincided with the 1998 El Nino, providing researchers an opportunity to make additional observations. Excessive rain associated with the El Nino resulted in high river flow that delivered large amounts of nutrients to the nearshore areas along the west coast of Florida in which turtle grass beds are found, causing blooms of microscopic algae (phytoplankton). Researchers found that resulting poor water quality and reduced sunlight penetration affected turtle grass beds in several ways – thinning of beds, losses in acreage and changes in the amount of stored carbohydrates and nutrients in the plants.

For more information about this study, see the following publications: