In brief, corals are a group of organisms related to sea anemones and sea jellies. These groups of soft-bodied animals make up the phylum Cnidaria. A primary characteristic of all Cnidarians is that they have tentacles with stinging cells called nematocysts. Unlike many Cnidarians, corals are a sessile organism, meaning that they are attached to the substrate, or base. Most species of coral are colonial, though some are solitary. One coral colony is made up of anywhere from several to thousands of individuals known as polyps. All coral polyps have the same basic body structure including tentacles with stinging cells that surround a mouth at the top of the central body cavity.

There are two general categories of coral: 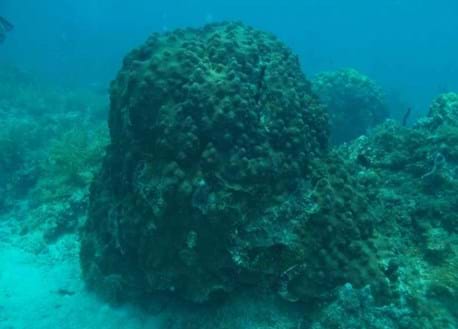 Hard Corals are corals that have six tentacles or multiples of six (i.e. 6, 12, 18, 24…). They secrete a rigid skeleton made of calcium carbonate. The polyps live on the surface and within the top few centimeters of the skeleton. Hard corals are also called "stony corals" and corals that form reef structures also referred to as hermatypic corals. 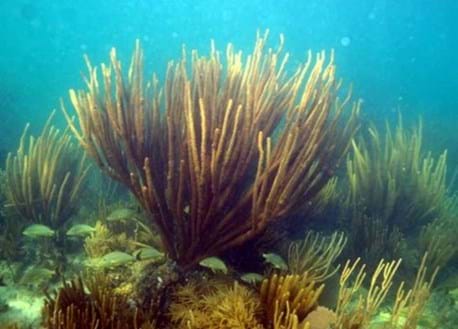 Hard corals come in a variety of growth forms. Some examples of these growth forms are branching corals, plate or sheet-forming corals, encrusting corals, and massive or boulder corals. Each polyp produces its own skeletal material and sits in a pitted area of the skeleton known as a corallite. For some species of coral, the corallites are fused together to form elongated ridges and valleys. Many species with fused corallites are commonly called brain corals because of their appearance, whereas many species with discrete corallites are commonly referred to as star corals. 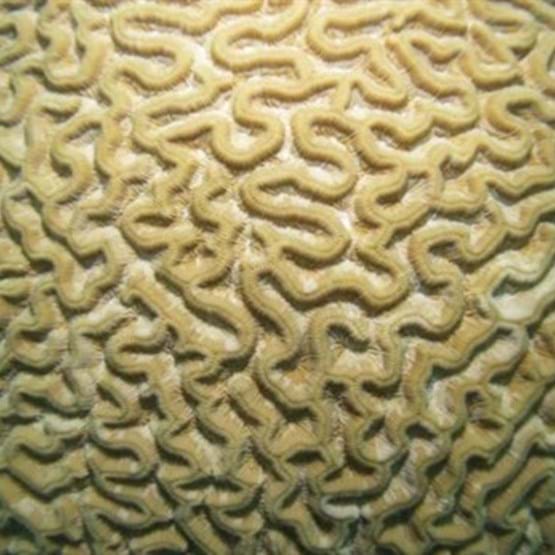 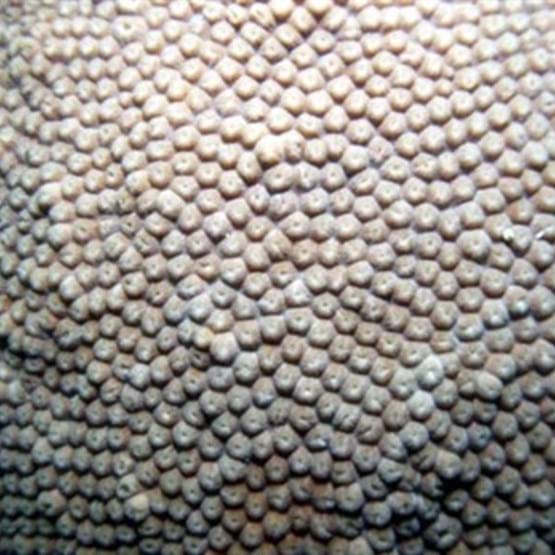 Although growth rates differ between different coral growth forms and species, hard corals generally grow very slowly. Hard coral growth is highly dependent on sunlight, warm temperatures ranging from 20oC (68oF) to 29oC (84oF) and water quality (clear, low nutrient water is ideal) and is therefore varies greatly from location to location and limited to shallow tropical and subtropical waters. In Florida, branching corals can grow as much as 10 centimeters per year, whereas massive coral colonies grow about one centimeter per year. Massive coral colonies like the star and brain corals pictured above can grow to be several meters across and can be several hundred years old.

Octocorals come in two general growth forms, encrusting and branching. The branching growth form, however, has many variations. Examples are sea rods, sea plumes, sea whips, and sea fans. While most octocorals have a flexible skeleton with a central core made of a protein called gorgonin, some have a central core made of tightly bound or fused calcareous known as spicules. These octocorals are not as common and are typically not as flexible.

Though growth rates in octocorals are not as well studied as those of stony corals, the more common octocoral species in Florida have been found to grow in height about two centimeters per year.

Many hard corals, and all hermatypic corals, share a symbiotic relationship, a relationship between two dissimilar organisms, with microscopic algae called zooxanthellae. These algae give stony corals their vivid color. Zooxanthellae create nutrients through photosynthesis and provide important resources to the coral polyp in exchange for a home within the polyp's living tissue.

Some octocorals share a symbiotic relationship with zooxanthellae, which is similar to that of hard corals, however, many do not. Octocorals that do not have zooxanthellae get their colors from pigments in the coral polyp or the outer layer of the skeletal structure.

Both groups of corals can use their tentacles to capture food (plankton). Although acquiring energy in this manner is more common among octocorals.

Hard corals and octocorals can reproduce both sexually and asexually.

Sexual reproduction in corals results in the start of a new coral colony and is accomplished by spawning or brooding. In spawning, gametes (sperm and egg cells) are released into the water column where they meet and form larvae which settle to the bottom and become new coral colonies. In brooding gametes meet and develop into larvae within a coral polyp and are then released into the water column to settle and become new coral colonies. Coral species that spawn do so only once per year. This generally happens in one mass-spawning event that typically occurs at the end of the summer.

Asexual reproduction in corals is accomplished either by fragmentation or by budding. Because corals are colonial animals, when their skeletons are broken up or fractured the resulting parts can continue to grow as new colonies. This method of reproduction is common among branching corals that can break into pieces from the intense physical stress of storms. These pieces then grow into new colonies. In this way large stands of branching coral can be produced. Budding is the process where one coral polyp splits into two. This is how a coral colony grows from one individual polyp to many.

Hydrocorals are found in all the same habitat types that stony corals are found in. The most common kinds of hydrocorals are the fire corals. These corals form hard calcium carbonate skeletons just like stony corals, however their skeletal structure and arrangement of polyps is much different from that of stony corals. While fire corals grow their own skeletal structures, they are also known to encrust substrate and other living organisms and are commonly observed overgrowing sea fans. Fire corals have unusually strong stinging cells and can sting snorkelers and divers who brush up against them.

Black corals are generally thought to live in deeper waters, but several species do live in shallow areas. These types of corals are similar in appearance to octocorals and form a skeleton made of protein, however the skeletal structure of black corals is hard and inflexible. Black coral polyps are not imbedded in the skeletal structure as with other types of corals. Because of this the dead skeleton of black corals has a smooth glossy finish which has led to the cultivation of these corals for jewelry and other trinkets. While these slow growing types of corals used to be common in some areas, they are now rarely seen due to overharvesting. 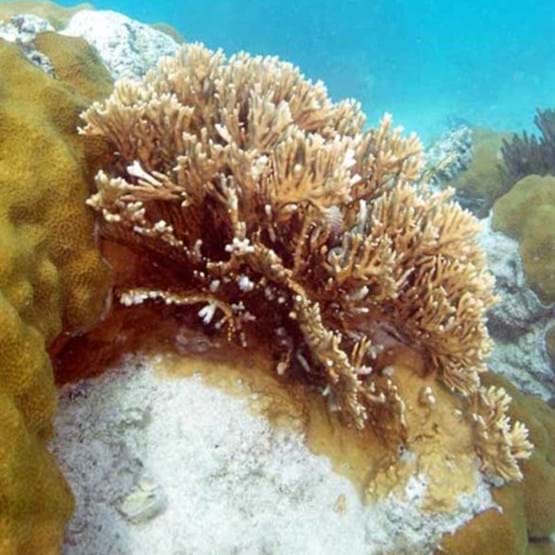 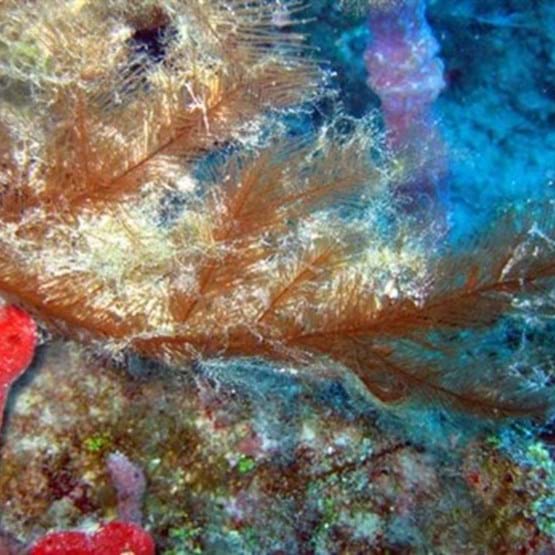 Coral reefs form over thousands of years as successive generations of corals grow on top of each other. When one stony coral colony dies other new stony coral colonies settle and grow on the former colony's remains. Although stony corals produce much of the calcium carbonate that forms reefs structures, other organisms such as algae and mollusks also produce considerable amounts.

Coral-like organisms that form calcium carbonate skeletons have existed on earth for 450 million years. Coral reefs similar to the ones we know today have existed since the age of the dinosaurs. They are present over large areas of the tropical and subtropical oceans and, like rainforests, are one of the most diverse and highly productive ecosystems on the planet. Though coral reefs are widespread, they comprise less than 1 percent of the world's oceans area. Despite this, nearly 25 percent of all marine animals use coral reefs for some part of their life cycle, including approximately 7,000 species of fishes, and countless species of algae and invertebrates.

The living coral reefs of Florida began forming about 6,000 years ago when sea levels stabilized following the last ice age. In Florida, well-developed coral reef communities exist from Palm Beach County southwest to the Dry Tortugas. The two types of coral reef structures off south Florida are patch reefs and bank reefs. Patch reefs up to several hundred meters across with several meters of vertical relief are generally found between the numerous islands and the outer bank reefs of the Florida Keys. Bank reefs make a continuous line of coral reefs stretching from southeast Florida to the Dry Tortugas several kilometers offshore. Bank reefs in Florida have grown into distinct spur in groove structures, with elongated sections of reef separated by sand spurs. 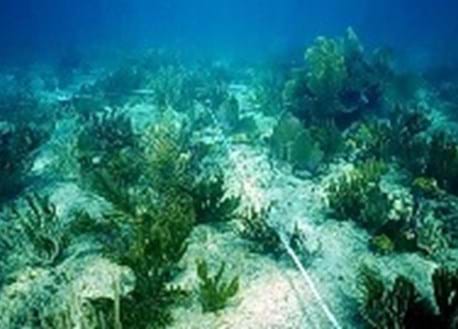 Hardbottom habitats are generally close to shore and are dominated by octocorals, sponges, and algae with low stony coral coverage and low stony coral species diversity. 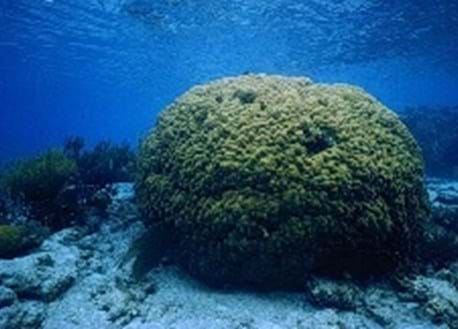 Patch reef habitats are usually characterized by high diversity of both octocorals and stony corals. A mature patch reef is roughly circular and the perimeter is buttressed by large boulder corals. 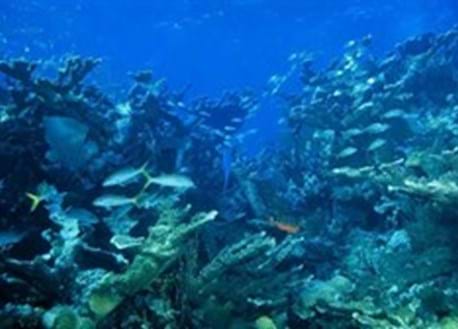 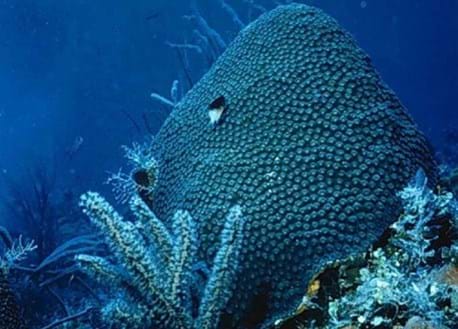 There are about 54 species of octocoral in southern Florida. Identifying octocorals by species is difficult and often requires the use of a microscope. The most common octocorals in Florida are Bent Sea Rod, Plexaura flexuosa, Spiny Sea Fan, Muricea muricata, Slimy Sea Plume, Pseudopterogorgia Americana, Common Sea Fan, Gorgonia ventalina, and Warty Sea Rod, Eunicea calyculata.