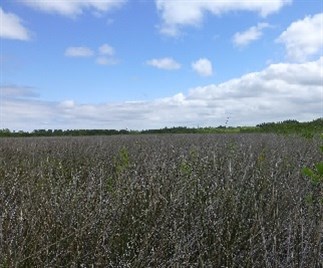 Salt marshes are found throughout Florida’s coastal areas, primarily along low-energy shorelines and within bays and estuaries. The ecosystems are characterized by daily tidal flooding and support dense stands of specially adapted salt-tolerant plants. Salt marsh vegetation occurs within the marsh between the low and high tidal zones and the flora are composed of a variety of rushes, grasses, and sedges. Florida’s salt marshes are typically dominated by black needle rush (Juncus roemerianus), smooth and saltmeadow cord grass (Spartina alterniflora andS. patens), and occasionally sawgrass (Cladium jamaicense). The distribution of these plants across the salt marsh is controlled by the level of tidal flooding, with smooth cord grass found in the lowest, wettest parts of the marsh; salt meadow cord grass in areas that receive intermediate levels of flooding, and black needle rush in the highest parts of the marsh. Sawgrass is typically a freshwater plant that can tolerate some salt and is usually found along the most inland edges of Florida salt marshes.

Salt marshes are a very important coastal ecosystem and provide numerous ecosystem services for the many species that make use of the habitat (including humans). The plants form the base of the food web and act as a direct food source for some organisms, while others utilize dead and decaying plants in the form of detritus. Along with food, salt marshes provide habitat for the majority of Florida’s commercial and recreational fish in either their juvenile or reproductive life stages. The marshes also support a number of commercially and recreationally important invertebrates including crabs, shrimp, and oysters. Salt marshes protect the coastline by providing protection from storm surge and coastal flooding, and act as natural filters to help improve coastal water quality. The marsh plants can help trap nutrients, pollutants, and sediment, thus keeping these things within the marsh and improving water quality further offshore. Despite their high value in terms of ecosystem services, salt marshes in Florida have historically diminished due to coastal development. Salt marsh loss has occurred everywhere they occur in Florida. Although these ecosystems are now protected, salt marsh loss continues to occur due to the influence of upstream changes in hydrology and associated inputs of excess sediments and nutrients. Additionally, natural drivers such as sea-level rise will reduce the amount of area available for marshes to migrate landward, since much of Florida’s coastal inland areas have been developed. Florida’s fisheries are also at risk of severe decline without the continued protection, conservation, and restoration of coastal salt marsh habitats.