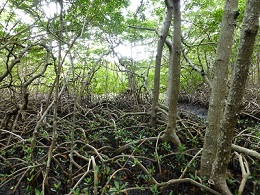 Mangrove forests are a distinct saltwater woodland that thrive in tidal estuaries and low-energy shorelines throughout the tropics and sub-tropics. Florida’s mangroves are typically found south of Cedar Key (Levy County) on the Gulf Coast and south of Cape Canaveral (Brevard County) on the Atlantic Coast. They grow in coastal intertidal environments and are able to tolerate a wide range of saline waters, from nearly fresh to very high salt content in coastal waters. Florida’s mangrove forests primarily consist of four trees: red mangrove (Rhizophora mangle), black mangrove (Avicennia germinans), white mangrove (Laguncularia racemosa) and buttonwood (Conocarpus erectus). Red mangrove is found closest to and often growing in the water. They are easily identified by their intertwined, red arching roots, called prop roots. The black mangrove is found further landward and can be identified by its distinct pneumatophores, which are dark, woody, fingerlike projections growing vertically from the soil. White mangroves occur at higher elevations than black and red mangroves, and are identified by their lack of visible roots. Buttonwood is considered an upland species because it typically grows above the area affected by tides. They can be identified by their button-like, or cone-shaped, fruit clusters. Buttonwood is not considered a true mangrove species because it lacks the distinctive reproductive and root characteristics of red, black, and white mangroves.

Mangrove forests are important because they provide critical habitat for adult fish and act as nursery habitat for juveniles. They also stabilize the shoreline and help prevent storm surge and erosion damage to coastal property. Mangroves help maintain water quality and clarity by trapping sediments, absorbing nutrients, and removing pollutants from land that would otherwise harm the coastal ocean. Despite these benefits, human activities such as coastal development are responsible for destroying more mangrove forests worldwide than any other type of coastal habitat. Indeed, loss of functional mangrove habitat has been severe in Florida’s three largest estuaries since the 1900s. Tampa Bay has lost nearly 50 percent of mangrove forests and Charlotte Harbor estuary has lost nearly 60 percent. On Florida’s East coast, while overall loss of mangrove acreage has not been severe, the construction of mosquito ditches and impoundments has resulted in nearly 85 percent of the mangroves in the Indian River Lagoon to be inaccessible and therefore unusable as nursery habitat for local fisheries. Fortunately, mangroves are currently protected by law in Florida to prevent future losses of these important coastal habitats.