An Eely Tale of Mistaken Identity 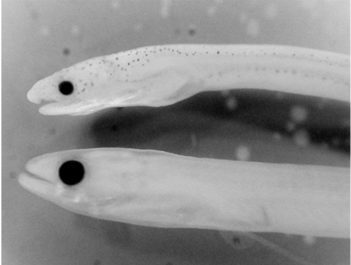 The two species featured in the pictures are the speckled worm eel (Myrophis punctatus; top) and American eel (Anguilla rostrata; bottom). They both have a similar life history, starting their lives offshore as larvae and then transforming into clear, miniature versions of their older selves, commonly called the glass-eel stage. American eels make this transition before they enter the estuary, but speckled worm eels primarily start transitioning after.

Although their lengths are similar, glass speckled worm eel weighed much less and had distinctive physical characteristics that could be used for identification. After these discoveries, biologists sifted through archived samples, identified the two species and corrected the data. Glass speckled worm eel catches vary from year to year and researchers found no detectable pattern in timing or abundance of these eels. In 2006 and 2012, which had the two largest catches of glass speckled worm eel, biologists also could not detect a relationship between daily catch rate and measured environmental variables.

In 2012, the Atlantic States Marine Fisheries Commission declared the American eel stock to be in a state of decline. Measures have been taken to reduce the harvest of all life stages, included the glass-eel stage, in all Atlantic coastal states. In fall 2014, the State of Florida enacted a nine inch (229-mm) minimum length limit for harvested American eel, eliminating any chance of glass eel harvest. This leaves only South Carolina and Maine as Atlantic states where glass American eel harvest is allowed. It is important that biologists in Florida and other southeastern states who conduct young-of-year eel surveys in estuarine waters where these two species can coexist ensure proper identification of each species.

More information about the comparison between glass speckled worm eel and glass American eel can be found in the recently published article of Fisheries Management and Ecology.