FWRI researchers are studying the prevalence of nematodes in the swim bladders of American eels. 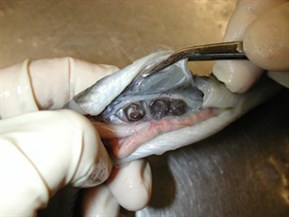 Biologists with the Florida Fish and Wildlife Research Institute (FWRI) are studying an exotic nematode parasite found in American eels (Anguilla rostrata). Little is known about the prevalence of infection in Florida’s eel populations and researchers are trying to collect information on these eels in several freshwater systems to determine the prevalence and intensity of infection on a statewide level.

Researchers believe the nematodes have originated from Southeast Asia and are specific to eels of the genus Anguilla. Since first confirmed in South Carolina in 1995, the parasite Anguillicoloides crassus has been documented in American eels inhabiting many Atlantic coastal streams, from Canada south to Texas.

American eels become infected by consuming intermediate crustacean hosts, like copepods or ostracods. They can also become infected by eating a host that is unaffected by the parasite and is merely a carrier. Nematode larvae can remain inactive, although still infectious, in many organisms such as snails, amphibians, insect larvae, and some fish. Once ingested, the larvae migrate to the swim bladder where they mature, reproduce, and ultimately release eggs and larvae back into the water through the eel’s digestive tract.

The swim bladder is important for a fish to regulate its position in the water column. As a result, these nematode infections can influence the fish’s ability to move up and down in the water column and may affect the migration of mature eels to their spawning ground deep in the Sargasso Sea. Although eels appear to handle these chronic parasitic infections well, they may still have to expend a lot of energy to cope, making the fish more prone to disease or succumbing more easily to environmental stressors.

Previous studies have shown that physical barriers, such as dams, and cooler water temperatures can limit the level of infection in eels. Given Florida’s subtropical temperatures and limited number of physical barriers, scientists are concerned that these infections can be more widespread in these populations. Researchers also hypothesize that more urban areas have higher rates of infection due to increased stressors in the environment. In 2006, preliminary surveys of commercially harvested eels found as many as one third of eels from the St. Johns River were infected. Researchers are currently conducting dissections and assessing overall health of eels in freshwater systems to learn more about the potential effects this parasite may have on Florida’s American eel populations.