The Science in Developing a Long-term Monitoring Program

FWRI biologists who work on the long-term monitoring program use various methods to ensure their research is as efficient as possible. 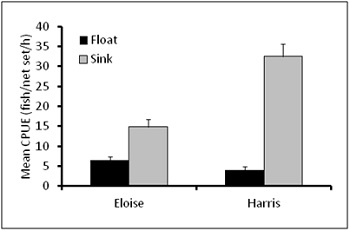 In 2006, the Florida Fish and Wildlife Conservation Commission (FWC) started a long-term monitoring program for lakes and reservoirs. This program focuses on collecting data on fish communities, sport fish, habitat and water quality. Each year fish are collected in a variety of ways from approximately 30 lakes to track trends over time. Although the program is well underway, biologists continue to evaluate their methods to ensure that the sampling is both scientifically sound and as efficient as possible.

Many factors are considered when deciding what sampling gear to use in a long-term monitoring program. Among these factors are cost, feasibility of use and effectiveness of the sampling method for catching fishes of interest. For example, FWC’s freshwater fisheries researchers use mini fyke nets for collecting fishes in shallow (less than one foot) water. These shallow areas are very diverse, ranging from bare sand to complex wooded or vegetated habitats. There are few sampling gears that can perform well in all of these habitats. This is a necessity when biologists are sampling throughout a large state as diverse as Florida and one of the primary reasons they include fyke nets in their sampling.

Another factor to consider when choosing sampling gear is bias. Arguably the most common freshwater fisheries sampling gear is electrofishing. It can be used in depths from about two to six feet and in all but the most complex habitats. However, some fish such as sport fishes are more susceptible to electrofishing than others. This is called bias, and every sampling method has it to some degree. Among the three sampling gears biologists use in the long-term monitoring program, electrofishing tends to collect the most species. In one study, it was found that 25 electrofishing samples collected more than 65 percent of the species on average in a lake, and when eight mini-fyke nets were used, that number jumped to 80 percent. Although gill nets, the last sampling method of the three, did not add much to the total, they can be an important tool for collecting species, like white catfish (Ameiurus catus) and channel catfish (Ictalurus punctatus), that are not commonly collected in the other two sampling gears. So, it is important to identify the target species and choose a gear that will effectively capture them.

After choosing a sampling method, biologists must then decide how the method should be used. What may work in one area of the country may not be right for Florida. Gill nets, for example, are used to sample the offshore fish community, and there are many different types of these nets. In reservoirs, floating gill nets are usually the most effective. However, after evaluating two net types, biologists found that sinking gill nets were much more effective for Florida lakes. They did a similar comparison for different placements of their mini-fyke nets, which proved to be very important since placement affected the types and numbers of fish captured. Biologists now have protocols that define how deep and how close to the lake boundary the nets should be placed. These results illustrate the importance of conducting studies to establish where and how the sampling gears are used.

Another factor biologists must consider is the number of samples. They use a variety of techniques to estimate how many samples they need to collect for a particular objective. Some use simple mathematical formulas by using information about the data and the measurable changes in that data, like average sizes and number of species. These techniques are especially common when biologists look at a small number of species. To answer complicated questions, they use more advanced computer programs. For example, biologists performed a study to determine what sampling gear combinations would collect the most variety of species on a lake. They found that sample sizes of 20 gill nets, 25 electrofishing sites and 30 mini-fyke nets were sufficient. These sample sizes were calculated with numbers and weight of fish in mind. When the sample sizes were calculated to identify what species were in each lake, they found they could accomplish their goal with 50 to 70 percent less effort, saving money and time.

There is a lot of work involved in establishing a long-term fisheries monitoring program, and it’s a process that continues to evolve. Using their ability to apply sound scientific principles, FWC researchers are able to make informed decisions about where and how they direct sampling efforts based on the needs of the resource and its managers. They will continue to work hard to ensure that sampling procedures will provide useful data in a timely and cost-efficient manner.

Based on analyses conducted by FWC researchers, this table shows how often each species is predicted in the catch when sampled with only 25 electrofishing transects and if they added 16 fyke nets and/or eight gill nets. Although electrofishing is traditionally the gear of choice for collecting fish community data, some species are more catchable with other sampling gears. These types of analyses allow researchers to assess the trade-offs between different combinations of gears and sample sizes.