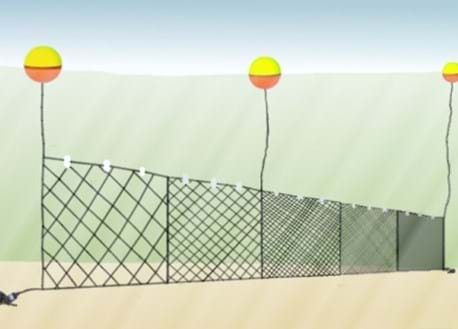 Gill nets measure 275 feet long by 6 feet high and are made of 25 panels, each having a different mesh size ranging from a panel with 0.75-inch mesh up to a panel with 5-inch mesh. Weights anchor the net to the lake bottom, while floats on the top keep it stretched vertically in the water column.

Biologists with the Fish and Wildlife Research Institute (FWRI), as well as other FWC divisions, use a variety of methods to sample freshwater fish communities. The type of gear used depends on the target species, sampling location and habitat.

Gill nets are stationary nets used to sample offshore areas where pelagic (open-water) species, such as shads (Dorosoma spp.) and black crappie (Pomoxis nigromaculatus), are found from December to April.

Biologists initially used floating gill nets for statewide Long-Term Monitoring Project efforts, as it is the typical way the nets are fished; but they noticed most of the fish were captured in the lower part of the net. Following a 2008 gear study, researchers determined gill nets deployed on the lake bottom – rather than floating on top of the water – were more efficient.

From 2008 to 2012, biologists used approximately 20 gill nets to sample 26 Florida lakes. Each sinking gill net measures 275 feet long by 6 feet high, comprising 11 panels, each 25 feet long with a different mesh size. Mesh sizes vary to ensure a catch consisting of all sizes of fish. Biologists feed the nets into the water, where it settles on the lake bottom. Floats along the top line of the net keep it vertical in the water column, allowing it to capture fish as they swim. After positioning nets and allowing them to soak for two hours, researchers collect, identify, weigh and measure the fish caught.

Biologists recorded the following from 2008 to 2012 using gill-net sampling:

Currently, the use of gill nets has been suspended from the Long-Term Monitoring Project, in favor of other sampling methods such as electrofishing and fyke nets that tend to help researchers collect a wider variety of species. Following a recently published study using fish community data collected from 2008 to 2012, researchers found that gill nets, for the amount of effort expended, collect fewer species than other gears. However, biologists will continue to use gill nets to target certain pelagic species, including channel catfish (Ictalurus punctatus) and striped bass (Morone saxatilis).