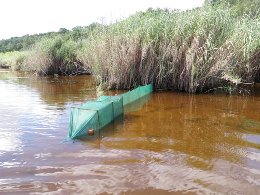 Biologists with the Fish and Wildlife Research Institute (FWRI), as well as other FWC divisions, use a variety of methods to sample freshwater fish communities, depending on the target species, sampling location and habitat.

In summer 2007, FWRI researchers initiated a study to determine the most effective gear for collecting fish in shallow-water environments less than 2.5 feet deep. Gear tested included mini block nets, backpack electrofishing, throw traps and mini fyke nets. Among these, staff preferred fyke nets because they are easy to use and effective at capturing fishes in a variety of habitats.

Fyke nets are long, stationary nets with a lead extending to the lake’s edge designed to direct fish through two chambers and a funnel into a final collection chamber (Figure 1). Each summer, researchers sample approximately 10 to 15 Florida lakes with these nets as part of the Long-Term Monitoring Project. They split the lakes into three sections and select 10 sample sites within each section.

Each summer from 2008 to 2012, researchers sampled 29 lakes with fyke nets. The total catch rate and types of fishes collected varied widely by lake, but as a whole, the statewide community snapshot painted a similar picture each year. At some lakes, such as Minneola (Lake County), Jackson (Leon County), Trafford (Collier County), Eloise (Polk County) and Dorr (Lake County), researchers tend to collect a relatively low number of species compared to others, including lakes Monroe (Volusia County), Kissimmee (Osceola County), George (Volusia County), Istokpoga (Highlands) and Deerpoint (Bay County). Researchers collected between 12 and 35 fish species, with an overall average of 24 species. To date, the most commonly observed species collected were eastern mosquitofish (Gambusia holbrooki) and warmouth (Lepomis gulosus). Other common species included:

As many of the species collected with fyke nets are food for sport fish and indicators of the overall health of a freshwater system, monitoring these shallow water communities is an important aspect of understanding how to best manage Florida’s freshwater resources.

Arrows show the path fish travel as they
enter a deployed fyke net, which is designed to
funnel fish through two sections into a final
collection chamber. The funnel-shaped
opening to each section allows fish to enter
easily but makes it difficult for them to swim out.