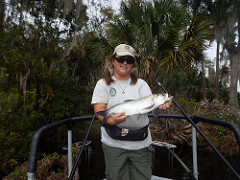 Though we tend to think of fish as being “saltwater” or “freshwater” there are fish that can handle both fresh- and salt-water. Some like salmon, American eels and American shad move from saltwater to freshwater or vice-versa to mate and grow to maturity. These fish are called “diadromous” and the movement is a normal and essential part of their breeding and life cycle. Others, like tarpon, snook, mullet and redfish tend to move between fresher and saltier waters based on other factors, usually food.

How can they do it?

Part of it has to do with the fish itself. Some fish species are “stenohaline” meaning they have a narrow range of salt tolerance. Goldfish, pompano, many sharks and pike are examples of stenohaline fish. Their bodies can only handle a small range of salinity in the surrounding waters. Freshwater stenohaline fish tend to regulate this by putting out a lot of dilute urine and by actively taking in ions through their gills to keeps the water in balance. This process is called “osmoregulation.” If they did not, they would absorb water and lose ions like sodium, potassium, and chloride. Stenohaline marine fish, on the other hand, produce small amounts of concentrated urine and shed ions through their gills. In another form of osmoregulation, marine fish can actually drink seawater. If marine fish didn’t, they’d lose water and become dehydrated.

Euryhaline fish have bodies that can adapt to a wider salinity range. They can produce concentrated or dilute urine, their gills can take in or excrete ions and they may or may not drink the surrounding water. It all depends on the water they’re in. The water itself also has something to do with it. Not all freshwater is really “fresh,” and the St. Johns River is no exception. When ocean waters receded and uncovered the central landmass that is now Florida some 10,000 years ago, residual seawater became trapped in pockets of what is now our aquifer. Florida’s springs tend to have more salt and minerals in their water than others. Because of this, the water in the springs, runs, lakes, and river tends to have more ions and salt than freshwaters in the panhandle or in a state like Georgia. Salt Springs off of Lake George is a great example of this with salinities as high as 4 parts per thousand. Silver Glen Springs has salinities as high as about 1 parts per thousand. This makes it easier for euryhaline marine fish to osmoregulate. 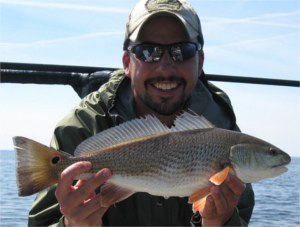 Another advantage to Florida’s “fresh” waters is that most of Florida’s water comes from limestone aquifers. As water percolates through the ground and into the aquifer it slowly dissolves the limestone. This in turn causes our water to contain ions of calcium and carbonate, which make up limestone. These ions can be used by fishes in place of the sodium and chloride ions found in saltwater, and allow fish to maintain an ionic balance that helps them keep functioning normally.

Other variables can also determine whether a marine fish can get into freshwater or not. Some fish have a narrow temperature range they can tolerate (stenothermal) while others have a wider range (eurythermal). Some stenothermal fishes, like snook, can’t take cold water so they need warm winters to allow them to move up the Florida coast all the way to Mayport, then they can swim upriver to as far as Blue Springs in Orange City. Redfish and tarpon, which have a wider range of temperatures they can tolerate, can migrate up and down the St. Johns River during most of the year, so normal winters don’t keep them out of the river and lakes. They can be more “year-round” visitors. In fact, these fishes may be more prevalent in the springs in the winter as the warmer spring water temperatures are easier on them.

Finally, there’s food. Like people, fish go where the food is good. This means that predatory fish can come up the river when food items like shrimp, menhaden and anchovies, or mullet run up the river. These prey items are usually coming upriver themselves for food as well. Once in the river the predators may or may not be feeding on the items they were following and could transition over to other forage. As most anglers will tell you, Florida’s waters have ample sources of food, so it’s not odd for saltwater fish, once they’ve made their way into freshwater, to stick around and snack on the abundant forage.