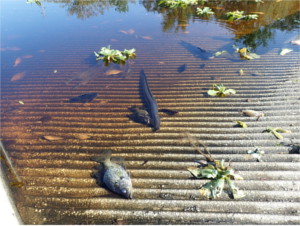 Many people believe that tannic acids, pushed into the river from swamps, causes oxygen levels to plummet and kill fish. That’s not exactly the case. The dark waters are stained by tannins and lignins, compounds that are a byproduct of the decomposition of plant materials. When bacteria are involved in decompostion, oxygen is consumed, creating what’s called a Biological Oxygen Demand (BOD). This BOD depletes oxygen in the water often to levels that are lethal to fish.

With each hurricane, there are usually a few days of overcast weather before and after the storm hits. This overcast weather causes the algae and plants in the water to lower oxygen production during the day (through photosynthesis) while they continue to consume oxygen at night. This drives down the oxygen levels even further. After the hurricane, dead vegetation is flushed out and bacterial decomposition continues to deplete oxygen. Darker, tannic stained waters that are flushed out of the local swamps also add to the shading effect and prolong the time it takes for regular oxygen production to resume.

FWC Biologists, along with the Army Corps of Engineers measured oxygen levels at several points along the St. Johns River and DO levels ranged between 0.09 and 1.5 mg/l due to these associated impacts from Hurricane Irma. Once the flood waters recede,  plants and algae in the waters will be able to produce enough oxygen to bring the oxygen levels up to a tolerable level for fish. How long this will take depends on how long it takes for the waters to recede and conditions to return to normal. As long as DO levels are not optimal, fish kills will continue.  It’s unfortunate, but natural.  We’ve observed this in the past with other hurricanes that have hit the state, and within a few years fish populations return to normal.