FWRI freshwater fisheries scientists in Melbourne conducted a study to determine the effect of cast-net fishing on habitat and sport fish species in the St. Johns River. 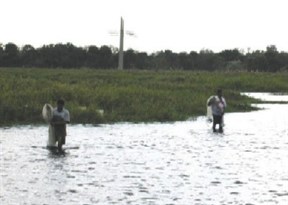 The brown hoplo, an exotic armored catfish, has become abundant enough to support a cast-net fishery on the upper St. Johns River. Recreational anglers using the river expressed concern that cast-netters were illegally harvesting sport fish, overharvesting native catfish species, and destroying habitat and spawning areas. To address these concerns and gain additional insight about this fishery, FWRI freshwater fisheries scientists in Melbourne conducted a study in the reach of the St. Johns River between State Road 520 and State Road 46. The study included creel surveys and fish population electroshocking.

Access-point creel survey results from January to April 2003 revealed cast-netters were the dominant user group (38%) in the upper St. Johns River, and brown hoplo was the main species harvested (95% of this group's total harvest). Cast-netters were found to be in possession of illegally caught sport fish in only two instances (98% compliance). Previous FWC law enforcement activity targeting cast-netters in this area revealed a 94% compliance rate, which is extremely high for any resource user group. The survey revealed that, while they were the dominant user group, cast-netters accounted for only about 20% of the harvest of native catfish species. With so little illegal harvest of sport fish and nominal harvest of native catfish, there appeared to be little evidence to suggest the cast-net fishery for armored catfish was adversely affecting the traditional recreational fishery.

Electroshocking, a common sampling method for freshwater fishes, uses electricity to momentarily stun fish. When done properly, electroshocking allows fish to be collected, measured, and released back to the water unharmed. Electrofishing catch-per-unit effort data have regularly been collected from this section of river since 1991. These data show no noticeable declines in sport fish populations. In some cases, when compared to earlier years, the numbers of sport fish of harvestable size appeared to have actually increased.

Finally, concerns about physical damage to habitat and spawning areas due to cast-netting activity are difficult to quantify due to the variability of a dynamic system like a river. However, because the brown hoplo is an air gulper and seems to prefer low-oxygen backwater habitats, interspecific competition (competition between different species) is probably minimal. They do not spawn on the bottom like native fishes. Instead, brown hoplo construct floating bubble nests that are not subjected to the debilitating effects of silty substrates found in backwater areas. Sport fish are unlikely to spawn or even inhabit these areas, and biologists suspect that cast-netting in these areas is not likely to damage habitat that can be used by sport fish.