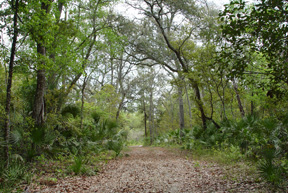 Managed in cooperation with the Office of Greenways and Trails.

The Gores Landing Unit of Ocklawaha River WMA consists of almost 3,000 acres along the Ocklawaha River in eastern Marion County between Gores Landing and County Road 316. Gores Landing Unit is on the Cross Florida Greenway and is managed by the Office of Greenways and Trails. This area is a link in the Cross Florida Greenway that conserves native landscapes from Palatka on the St. Johns River to Inglis near the Gulf of Mexico. The natural communities on the area are mostly hydric hammocks and flatwoods, and scrub ridges. Wild turkey, white-tailed deer and wading birds are abundant on this area.

Recreational activities include hunting, fishing, wildlife viewing, hiking, horseback riding, and paddling although there are no established trails. Children under the age of 16 are required to wear a helmet when horseback riding on public lands. For more detailed information go to Nicole's Law. All horseback riders must have proof of current negative Coggins Test results for their horses when on state lands. Camping is prohibited.