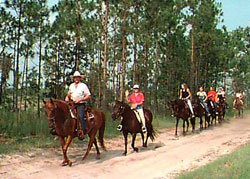 Managed in cooperation with the Florida Forest Service.

Goethe Wildlife Management Area (WMA) consists of more than 48,000 acres in southeastern Levy County, south of Bronson. The large tract of old-growth longleaf pines on the area is home to the rare red-cockaded woodpecker, as well as the gopher tortoise, Sherman's fox squirrel and bald eagle. Within Goethe are more than 15 natural community types, including cypress swamps and sandhills.

An extensive trail system may be accessed at three separate trailheads, and recreational activities include hunting, fishing, wildlife viewing, bicycling, hiking, horseback riding, and picnicking.  Children under the age of 16 are required to wear a helmet when horseback riding on public lands.  For more detailed information go to Nicole's Law. All horseback riders must have proof of current negative Coggins Test results for their horses when on state lands. Camping is allowed year round through a permit obtained from the Florida Forest Service.