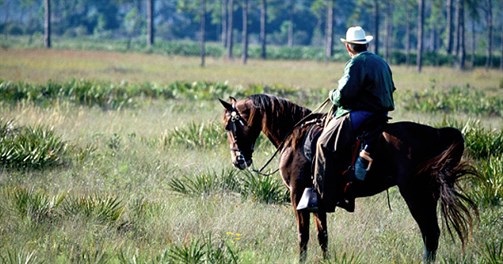 Managed in cooperation with the South Florida Water Management District.

John G. and Susan H. DuPuis, Jr. Wildlife and Environmental Area (WEA) consists of nearly 22,000 acres in northwestern Palm Beach and southwestern Martin counties and adjoins the J.W. Corbett Wildlife Management Area to the east. This property was formerly the White Belt Ranch, a working livestock ranch owned by the late John G. DuPuis. Once part of the Everglades ecosystem, the hydrology of the area was altered through drainage. The water management district has restored portions of the land by rehydrating interior wetlands. Today, two-thirds of the area is pinelands, and one-third is cypress swamp and freshwater marsh. In the rainy season, the pine flatwoods often contain standing water and portions of the roads could be flooded.

This is a no-cost quota hunt area, and deer, hog and turkey are plentiful. During hunting seasons, with the exception of Small Game and the Wild-Hog Still seasons, access to the area is open only to quota hunt permit holders and through-hikers on the Ocean to Lake Trail, an official side trail of the Florida National Scenic Trail. The 35 miles of hiking trails on the area include the Ocean to Lake Trail, which traverses the width of the area, and 4 loops ranging from 5 to 15.6 miles. Parking for hikers is located at the trailhead at Gate 2.

An equestrian center at Gate 3 has horse barns, paddocks, campsites, restrooms with showers, a dump station, and a trailhead marking the beginning of 40 miles of equestrian trails. Children under the age of 16 are required to wear a helmet when horseback riding on public lands. For more detailed information go to Nicole's Law. All horseback riders must have proof of current negative Coggins Test results for their horses when on state lands.

Camping is permitted at designated campgrounds as well as at primitive campsites along the Ocean to Lake Trail and biking is allowed on named roads. Alligators, river otters, feral hogs, coyotes, white-tailed deer and bald eagles are some of the wildlife that make their home on this area.