Sawfish: What to do when you accidentally hook one 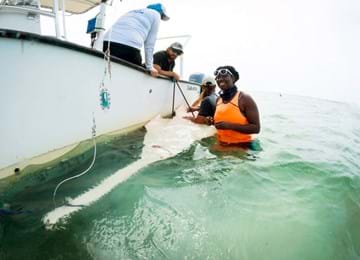 When I started graduate school at Florida State University, I had never seen a sawfish in the wild but I was excited to be part of the recovery of a species I had been so awestruck by in aquariums.

The smalltooth sawfish, the only sawfish found in Florida, has been protected in Florida since 1992 and became federally listed under the U.S. Endangered Species Act in 2003. Little was known about the species when it became listed but since that time, scientists have learned a lot about its biology and ecology.

As sawfish recovery efforts continue, we expect there to be more sawfish sightings, especially in Florida. This includes anglers who may accidentally catch one on hook-and-line while fishing for other species.

Sawfish can be encountered when participating in a number of activities including boating, diving and fishing. Further, the species may be encountered by waterfront homeowners and beach goers in the southern half of the state where juvenile sawfish rely on shallow, nearshore environments as nursery habitats. When fishing, targeting sawfish is prohibited under the ESA, though incidental captures do occur while fishing for other species. Knowing how to properly handle a hooked sawfish is imperative as sawfish can be potentially hazardous to you. One of the first things that stood out to me while conducting permitted research was the speed at which a sawfish can swing its rostrum (commonly referred to as the saw). For creatures that glide along the bottom so slowly and gracefully, they sure can make quick movements when they want to. It’s best to keep a safe distance between you and the saw.

If you happen to catch a sawfish while fishing, do not pull it out of the water and do not try to handle it. Refrain from using ropes or restraining the animal in any way, and never remove the saw. It is important that you untangle it if necessary and release the sawfish as quickly as possible by cutting the line as close to the hook as you can. Proper release techniques ensure a high post-release survival of sawfish. Scientific studies show us that following these guidelines will limit the amount of stress a sawfish experiences as a result of capture. Note that a recent change in shark fishing rules requires use of circle hooks, which results in better hook sets, minimizes gut hooking, and also maximizes post-release survival.

In addition to capture on hook-and-line, sawfish can easily become entangled in lost fishing gear or nets. If you observe an injured or entangled sawfish, be sure to report it immediately but do not approach the sawfish. Seeing a sawfish up close can be an exciting experience but you must remember that it is an endangered species with strict protections.

If you are diving and see a sawfish, observe at a distance. Do not approach or harass them. This is illegal and this guidance is for your safety as well as theirs.

An important component of any sawfish encounter is sharing that information with scientists. Your encounter reports help managers track the population status of this species. If you encounter a sawfish while diving, fishing or boating, please report the encounter. Take a quick photo if possible (with the sawfish still in the water and from a safe distance), estimate its length including the saw and note the location of the encounter. The more details you can give scientists, the better we can understand how sawfish are using Florida waters and the better we can understand the recovery of the population. Submit reports at SawfishRecovery.org, email sawfish@MyFWC.com or phone at 1-844-4SAWFISH.

Sawfishes, of which there are five species in the world, are named for their long, toothed “saw” or rostrum, which they use for hunting prey and defense. In the U.S., the smalltooth sawfish was once found regularly from North Carolina to Texas but its range is now mostly limited to Florida waters.

In general, sawfish populations declined for a variety of reasons. The primary reason for decline is that they were frequently caught accidentally in commercial fisheries that used gill nets and trawls. Additional contributing factors include recreational fisheries and habitat loss. As industrialization and urbanization changed coastlines, the mangroves that most sawfishes used as nursery habitat also became less accessible. For a species that grows slowly and has a low reproductive rate, the combination of these threats proved to be too much.

During my thesis research, which focuses on tracking the movements of large juvenile and adult smalltooth sawfish, each tagging encounter is a surreal experience.

The first sawfish I saw was an adult, and what struck me the most was just how big it was. I also remember being enamored by its mouth. Like all other rays, its mouth is on the underside of its body. The mouth looks like a shy smile and I found it almost humorous how different the top of the sawfish was compared to the bottom. After seeing my first baby sawfish, the contrast seemed even greater. It’s hard to believe upon seeing a 2 to 3 foot sawfish that it could one day be 16 feet long! No matter the size, anyone who has encountered a sawfish will tell you it’s an experience like no other.

The hope is that one day the sawfish population will be thriving once again, and more people will be able to experience safe and memorable encounters with these incredible animals. Hopefully, we can coexist with sawfish in a sustainable and positive way in the future.

For more information on sawfish, including FWC’s sawfish research visit:
MyFWC.com/research, click on “Saltwater” then “Sawfish.”

For more information on smalltooth sawfish and their recovery watch:
YouTube.com/watch?v=NSRWUjVU3e8&t=3s

The quarterly Gone Coastal column is one of many ways that the Florida Fish and Wildlife Conservation Commission (FWC) Division of Marine Fisheries Management is helping recreational anglers understand complex saltwater regulations and learn more about saltwater fishing opportunities and issues in Florida. We are also available to answer questions by phone or email anytime, and we would love the opportunity to share information through in-person presentations with recreational or commercial fishing organizations. To contact the FWC’s Regulatory Outreach subsection, call 850-487-0554 or email Saltwater@MyFWC.com.