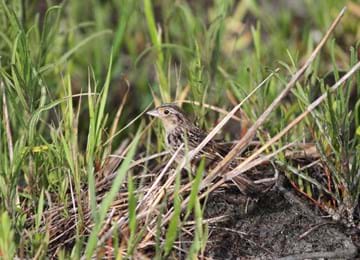 In May 2020, the Florida grasshopper sparrow captive breeding and release program achieved an important milestone: researchers have detected captive-reared sparrows breeding in the wild and some of these birds have already successfully fledged young.

The Florida Fish and Wildlife Conservation Commission (FWC), U.S. Fish and Wildlife Service (USFWS), and partners released captive-reared sparrows into the wild in an effort to boost the existing population. In the past few years, the population of Florida grasshopper sparrows has declined sharply; without intervention, extinction is a real possibility. Surveys in 2019 indicated that only 30 breeding pairs remained in the wild. The multipartner recovery program’s captive breeding and release efforts are part of a broader strategy to avoid extinction of these birds.

Between 2019 and 2020, the FWC and the USFWS released 150 captive-reared Florida grasshopper sparrows, with more releases planned for this year. Field researchers have detected more than 25 captive-reared and released sparrows defending territories, indicating they survived and made the Florida dry prairie their new home. This is just the start of the breeding season but even at this early stage, the proportion of released sparrows that have survived exceeds that observed in many other captive release efforts of similar birds. In addition, researchers have found nests of eight captive-reared sparrows, and parents at two of these nests have successfully fledged young so far.

“The finding that captive-reared sparrows can breed in the wild is a game-changer,” said Juan Oteyza, lead sparrow research scientist at the FWC’s Fish and Wildlife Research Institute. “This indicates that individuals bred in captivity can supplement wild populations and therefore reduce the risk of extinction.”

"This initial success with captive reared Florida grasshopper sparrows breeding in the wild is a testament to and confirmation of all the hard work our partners and individual scientists have put into this ground-breaking recovery effort for more than a decade. But while this is a major, major milestone, now is not the time to pop the cork on Champagne. It's more so a signal that we must redouble our efforts to keep this momentum going," said Larry Williams, State Supervisor, Florida Ecological Services, U.S. Fish and Wildlife Service.

Since 2012 the USFWS, the FWC, and partners, including White Oak Conservation and the Fish & Wildlife Foundation of Florida, have dedicated significant financial resources and personnel to the recovery of the Florida grasshopper sparrow. The team developed a 5-year strategic vision to guide management actions, including habitat management, nest protection, research, monitoring, and captive breeding and release. The captive breeding project is funded in part by a grant from the nonprofit Fish & Wildlife Foundation of Florida via proceeds from the “Conserve Wildlife” license plate. Additional funding is needed to expand captive breeding and to support additional conservation research projects. Concerned citizens who would like to join the effort to save these birds can donate to the Fish & Wildlife Foundation of Florida’s sparrow fund at wildlifeflorida.org/funding-priorities.

Since its founding, the Foundation has raised and given away more than $45 million for conservation, outdoor recreation, and youth programs and camps. For more information, visit wildlifeflorida.org or call 813-358-8058.