Fish attractors deployed in Lake Apopka thanks to public-private partnership 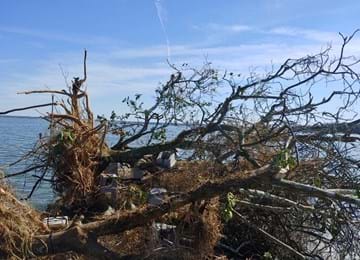 The Florida Fish and Wildlife Conservation Commission (FWC) partnered with The Town of Montverde, Shelley’s Environmental Systems and the private owners of a now-defunct citrus grove to help rebuild fish attractor locations in Lake Apopka. On Jan. 19 and 20, the remains of old citrus trees were deployed in the lake. Fish attractors concentrate fish where anglers can easily catch them, which provides greater fishing opportunities for Florida anglers.

Thanks to the private land owners who were removing an old orange grove and Shelley Environmental Systems, which donated the use of an excavator, fuel and the services of an operator for the duration of the project, 17 fish attractors created from over 100 citrus trees were refurbished and anchored to the bottom of the lake in deliberate locations. These spots are marked with a buoy. The twisted branches and roots will provide an ideal habitat for Lake Apopka’s reestablished game fish population, which provides locations for anglers to reel in a great catch.

Fish attractors were previously deployed into Lake Apopka in 2013. They were built out of natural brush and, with time, the branches in those locations decayed and fell away. The new citrus trees came at a perfect time to give biologists an opportunity to rebuild the fish attractors and continue to provide great habitat for game fish and other species in Lake Apopka.

Lake Apopka is the fourth largest lake in Florida at 30,000 acres and is part of the Harris Chain of Lakes in Orange and Lake counties. This waterbody was once a world class fishery with quality habitat including abundant submerged plants and a vast marsh on the north side of the lake. In the past 30 years, many restoration projects have been completed at Lake Apopka that have turned the once polluted lake into a promising fishery with a bright future ahead.

For information about the Lake Apopka Fish Tag Challenge, including full contest rules and a list of prizes, visit the Friends of Lake Apopka website at fola.org.

For more information on Lake Apopka contact Scott Bisping at Scott.Bisping@MyFWC.com or 352-800-5027.