The South Florida Deer Research Project, one of the largest white-tailed deer studies conducted in the country, is now complete. The Florida Fish and Wildlife Conservation Commission partnered with University of Georgia, Virginia Tech, Jones Center at Ichauway, U.S. Fish and Wildlife Service, and National Park Service to gain a better understanding of how water levels, habitat differences, predation and hunting impact deer populations in south Florida. Another goal was to develop a monitoring technique to provide reliable estimates of deer densities in south Florida habitats.

The project ran from 2014 through the end of 2018 and involved four years of intensive field work. Research sites consisted of the Florida Panther National Wildlife Refuge (FPNWR), the Bear Island Unit of the Big Cypress National Preserve (BCNP), and a northern section of the Addition Unit of BCNP, commonly referred to as the North Addition Land. 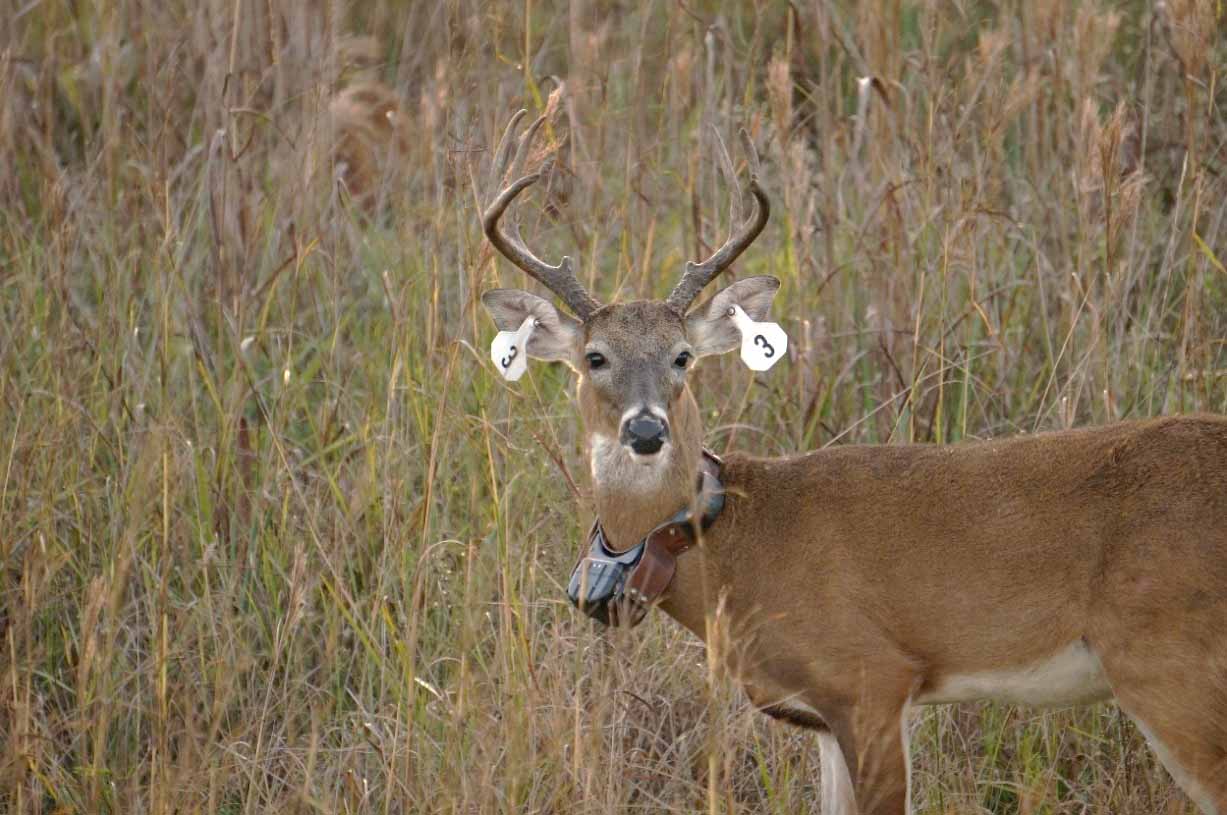 Throughout the state, white-tailed deer are one of the most valued and sought-after game species. In south Florida, deer also are the most important prey species of the Florida panther. In recent years, particularly in the southern portion of the Big Cypress National Preserve and Everglades National Park, the area has experienced deer population declines. Although these declines have coincided with changes in hydrology, habitat and predators, the extent to which these variables have affected the deer population was unknown. The South Florida Deer Research Project was initiated in part due to concerns voiced by hunters and agency managers over declining deer populations as well as the need for updated information for management purposes.

Although white-tailed deer are one of the most well-studied wildlife species, information about deer in south Florida was limited. Previous deer research in the Big Cypress National Preserve region occurred in the early 1990s. The area has changed significantly since then, including changes in hydrology, panther abundance, and the broader predator community. Therefore, up-to-date information on survival, causes of mortality and population trends was needed to make effective management decisions.

In addition, a cost-effective and reliable way to monitor deer densities was needed. Reliable population density estimates are essential for science-based management in this dynamic region of Florida but are difficult to obtain. In this region, aerial surveys have been the most common method to estimate deer abundance. While these surveys work well in some areas, they are problematic in areas with thick habitat cover and only provide trend data rather than a precise population estimate.

Over three capture seasons (winter 2015, 2016 and 2017), 294 deer were captured of which 263 adult deer (172 females, 91 males) were fitted with Global Position System (GPS) collars to monitor their survival and learn how they use various habitats in the south Florida landscape.

Deer were captured using three different methods: net-gunning from helicopters, rocket netting, and darting from tree stands. Researchers fitted each deer with a GPS collar, attached ear tags, measured and evaluated body weight and condition. Deer were then released at the capture site.

During the study, GPS collars provided over 590,000 deer locations, which was key to understanding survival rates, causes of mortality, and habitat use. Using field sign and necropsy (animal version of autopsy), researchers were able to investigate causes of mortality. GPS locations also provided information about home-range size and how deer movements were impacted by various factors such as water levels, predators, hunters, and habitat quality.

In addition to the use of GPS collars, 180 remote-sensing trail cameras were deployed across the three study areas and used to develop a new monitoring method for estimating deer abundance and density. Cameras were placed in grids representing all major habitats, hydrological conditions, and levels of hunting activity within the study area. During the 3 years cameras were deployed, the team collected 477,000 photos of wildlife (deer, panther, bear, etc.). For images of deer, researchers recorded information about the number of deer; whether they were male, female or fawn; their behavior; and identification number if the deer was collared or tagged.

Trail cameras, in combination with deer that were collared and ear-tagged, were the main components in developing the monitoring method to estimate deer densities. Camera data also provided information about: 1) how deer use different habitats across seasons, 2) location and timing of deer and other wildlife species’ activity patterns , and 3) factors related to fawn survival. 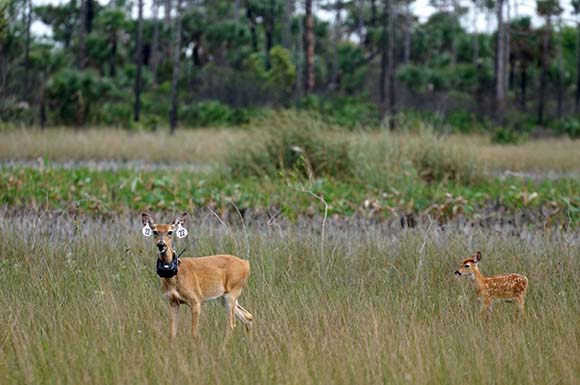 One of the main objectives of the study was to investigate how hydrology (water levels), predation, and hunter harvest impacted deer populations in the study area.

These charts show the probability of survival of radio-collared male and female white-tailed deer over the four-year study. 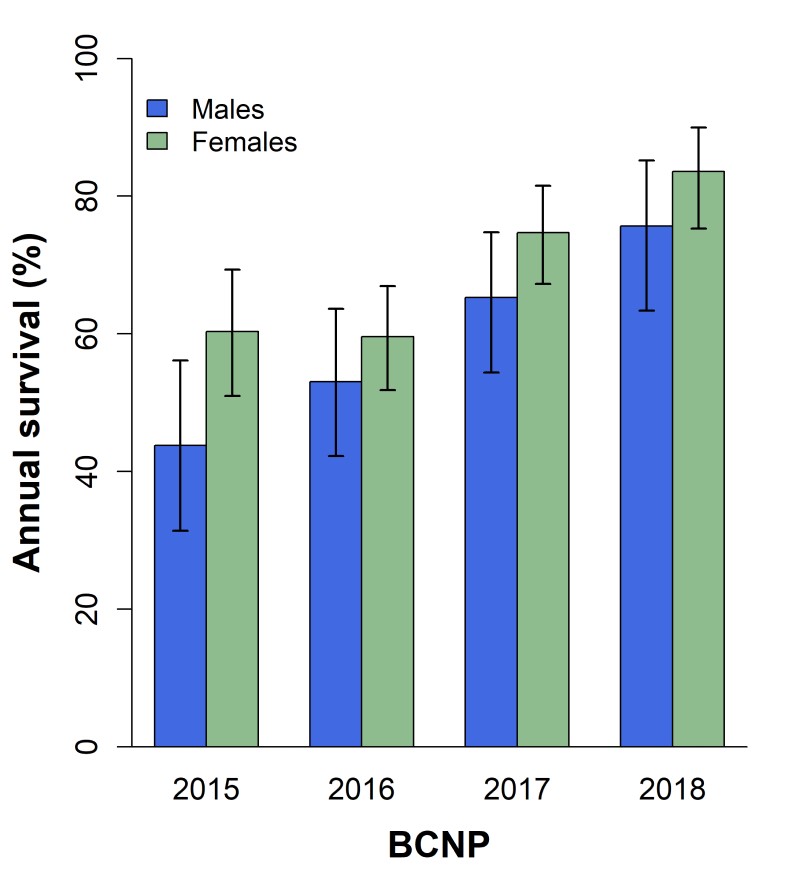 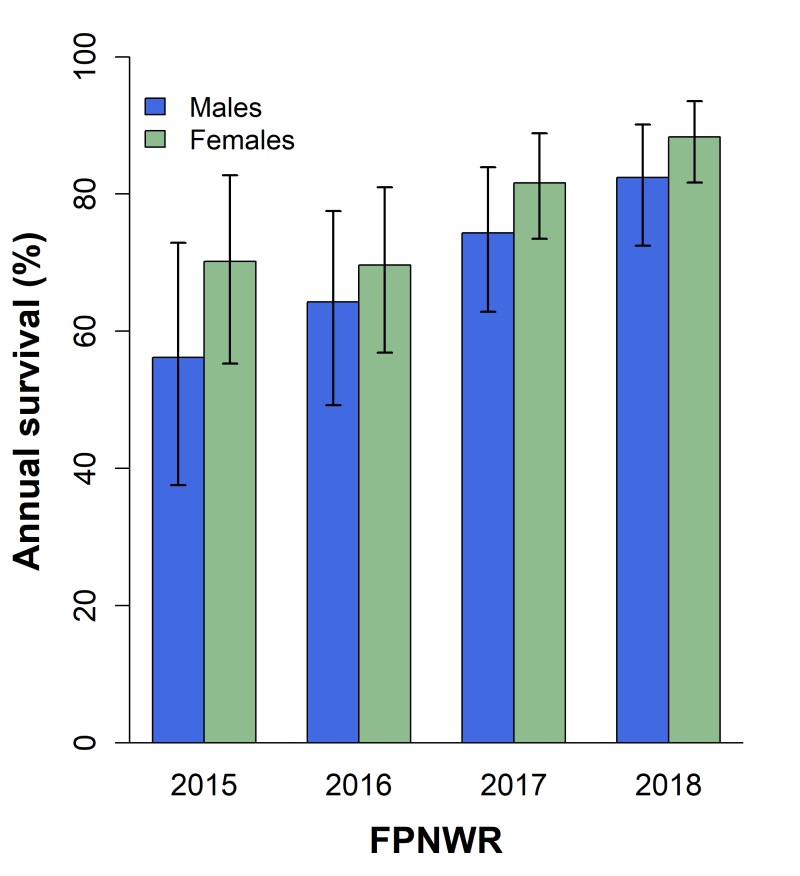 Researchers found evidence that water levels influenced deer survival. As water levels increased, survival decreased, particularly for female deer. Although adult deer didn’t drown, water levels may have influenced deer movement by increasing the use of edges and roads during high water, which may have made them more vulnerable to predation. Researchers also observed that fawn survival was lower during the 2016 fawning season, which was characterized by severe flooding compared to the previous fawning season when conditions were drier. Fawns were not collared; so, it is difficult to determine with certainty what caused fawns to die.

The figure shows how the survival percentage for male and female white-tailed deer decreased as water depth increased from -0.5 meter up to 1 meter. Female survival was more strongly impacted by water depth. For example, female survival decreased by up to 9% when water level reached 0.5 meter, and up to 22% at 1 meter. 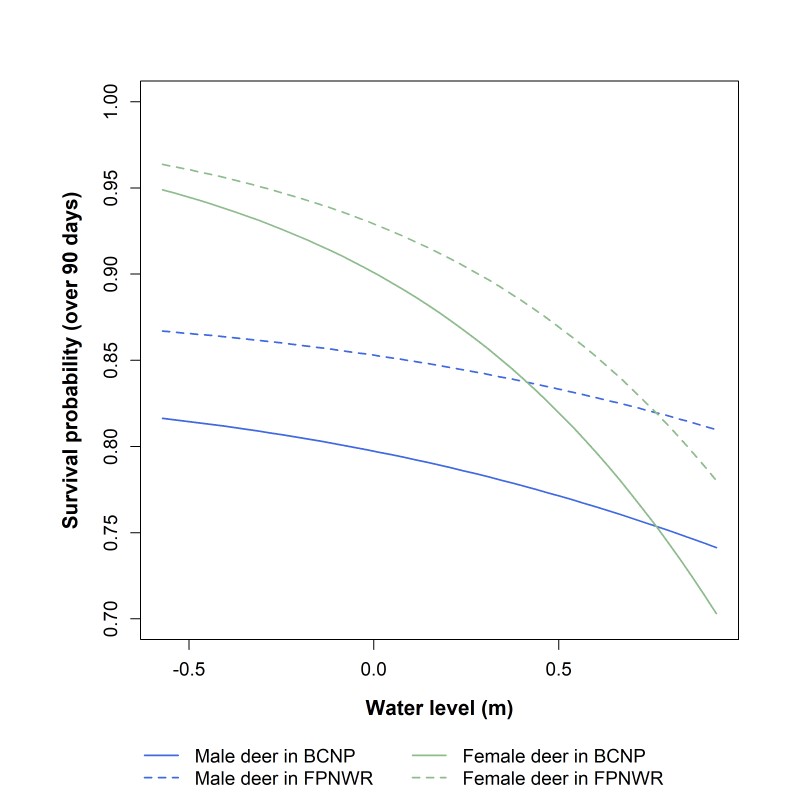 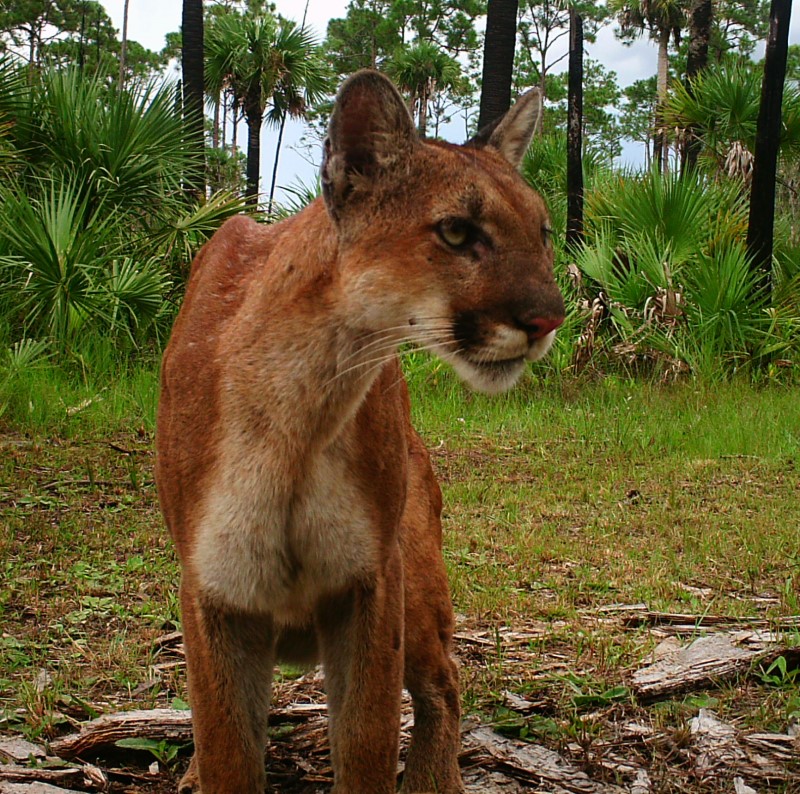 Predation was the leading cause of deer mortality across all years. During the study, panther predation accounted for 72% (n=96) of the 134 mortalities of collared deer, followed by bobcat (5%), unidentified predator (3%), black bear (1%), and alligator (1%). Other causes of mortalities included unknown cause of death (10%) and disease (3%), research induced (2%), hunting (1%), and poaching (1%). 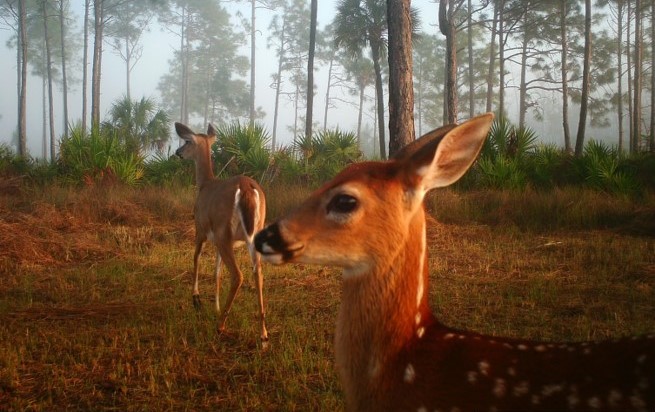 Hunting is not allowed at the Florida Panther National Wildlife Refuge and only antlered deer with at least two points on one side can be harvested at Big Cypress National Preserve. With only a small portion of the study animals available for legal harvest, hunting did not have a negative impact on the deer population in the study area.

From a population growth perspective, overall survival rates, particularly those of female deer, matter the most. During the study, up to 88% of the collared deer survived (depending on the year and/or sex of deer). The information about the cause of death is important because it increases our understanding of the system overall. Compared to the past studies conducted in the region, panther predation has increased, and mortality due to bobcat predation and hunter harvest had decreased. 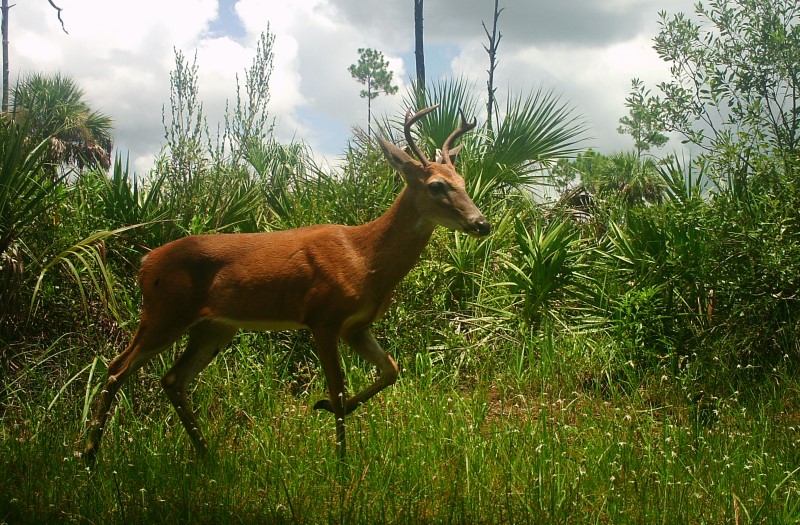 The study’s second objective was to develop a new way to estimate deer density, or the number of deer per unit area, using trail cameras. Estimating deer densities with trail cameras is not new, but previous methods used bait such as corn to attract deer to the camera site. Using bait sites in south Florida is not effective because of issues with bait attracting predators and seasonal flooding making bait unavailable. In addition, existing methods are often limited to estimating the number of adult bucks (based on antler characteristics) and using that information to estimate the number of does and fawns.

In the South Florida Deer Research Project, researchers did not use bait to attract the deer. Trail cameras were placed on manmade and wildlife trails, where deer and other animals were likely to walk by. The challenge was how to use the number of deer photographed to estimate the number of deer that live in the area, particularly when it came to female deer that cannot be identified into individuals.

Researchers overcame that challenge by using photo counts and information from GPS collars. The GPS locations allowed researchers to know how and where deer were moving on the landscape. Using mathematical models, that information allowed the team to estimate the probability that a deer will be photographed if it lives in an area with trail cameras, which enabled them to estimate deer density in a given area. 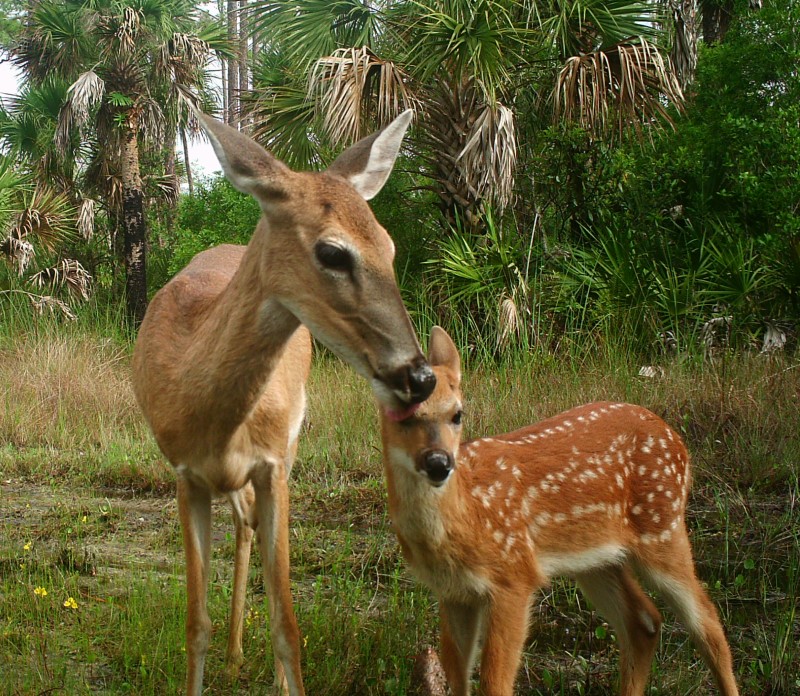 Many other research questions were investigated during this study. For example, the team used GPS locations to estimate annual and seasonal home ranges. Average home range size was 2.7 square miles for males and 0.6 square miles for females. Across sites and seasons, female home ranges remained stable, suggesting females were able to meet their needs within a similar area throughout the year, despite variation in seasons and energy requirements (e.g. during lactation when females have high energy needs). In contrast, males’ seasonal home ranges were larger in the wet season (May-October) than the dry season (November-April), mainly due to males moving considerably more during the rut.

Other parts of camera-based research included estimating fawn survival using the unique spot patterns on fawns, estimating when bucks cast their antlers, understanding how panther activity impacted where and when deer were active, and evaluating how counts of other species varied across the study areas. Using GPS locations, the team also investigated how water levels impacted deer movement and habitat use.

The team also acknowledges and thanks the following people who assisted with everything from deer capture and data entry to housing and helicopter teams:

We also send our heartfelt appreciation to the men and women who are a part of Florida’s hunting community. Their commitment to conservation was essential to the success of this project. In addition, their ongoing financial support and advocacy and community outreach efforts are paving the way for a bright future for Florida wildlife.

Quarterly project updates are posted below.