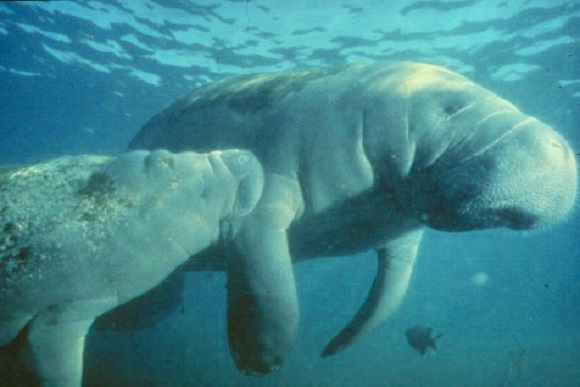 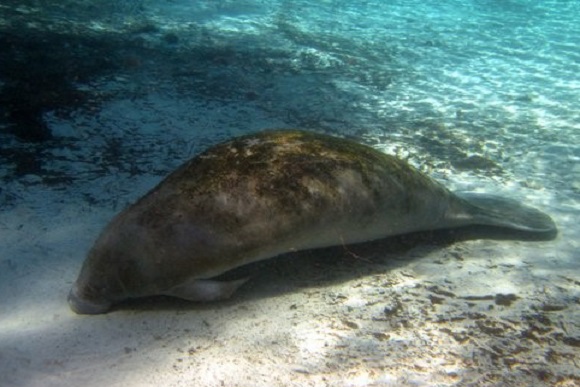 What to Do if You See a Sick, Injured, Dead, or Tagged Manatee

How to help manatees

Florida manatees are large, aquatic mammals that are native to Florida. Adult manatees are typically 9-10 feet long from snout to tail and weigh around 1,000 pounds; however, they may grow to over 13 feet long and weigh more than 3,500 pounds. Manatees have two fore limb flippers that they use for steering movements and to hold vegetation while eating. A large, round, flattened paddle-shaped tail is used for swimming. Manatees have finely-wrinkled, leathery looking thick skin that continuously flakes off. Algae often grows on the backs and tails of manatees, which makes their skin color appear green or brown. Barnacles (found mostly on coastal dwelling manatees) often leave round scars from attachment sites; movement from saltwater to freshwater habitats clears the animals of these saltwater hitchhikers. The manatee’s flaky skin adaptation also helps keep the algae and barnacles from building up on the animals. These unique aquatic creatures definitely have some highly specialized features. The West Indian manatee's range is from the southern United States throughout the Caribbean Islands, Central America, and to northern South America.

In the United States, the Florida manatee, a sub-species of the West Indian manatee, inhabits the state’s coastal waters, rivers and springs. Some Florida manatee are known to travel up the eastern coastline into Georgia, the Carolinas, and a few travel as far north as Massachusetts during warm months.

In the Gulf, Florida manatees can be found west through coastal Louisiana and are occasionally sighted as far west as Texas. Prior to winter’s coldest months, manatees migrate to warm water habitats in Florida. These warm-water sites include artesian springs and power plant discharge canals. Florida is at the northern end of the manatee’s winter range and these warm-water habitats play an important role in their survival during the winter months. Manatees are aquatic herbivores (plant-eaters). Also known as "sea cows," these herbivores usually spend up to eight hours a day grazing on seagrasses and other aquatic plants. A manatee can consume from 4 to 9 percent of its body weight in aquatic vegetation daily.

Manatees use their tails in an up and down motion to propel themselves forward. Strong swimmers, they are capable of reaching speeds of 15 miles per hour in short bursts. Manatees rest from 2 to 12 hours a day either suspended near the water's surface or lying on the bottom, usually for several hours at a time.

While most people tend to see many manatees gathered together at winter warm-water sites, during the rest of the year these animals are semi-social as they travel around the state’s waterways in search of food, mates or places to rest. Except for cow/calf pairs and small mating herds, manatees do not need to travel together although they do socialize when other manatees are encountered.

Manatees reach sexual maturity in 3-5 years (females) and 5-7 years (males) and may live over 65 years in captivity. Gestation is approximately 13 months and usually one calf is born. The calf may stay with its mother (cow) for up to 2 years. Male manatees (bulls) are not part of the family unit. Bulls will leave a cow alone after her breeding period is over. Of the wild manatees that reach adulthood, only about half are expected to survive into their early 20s. 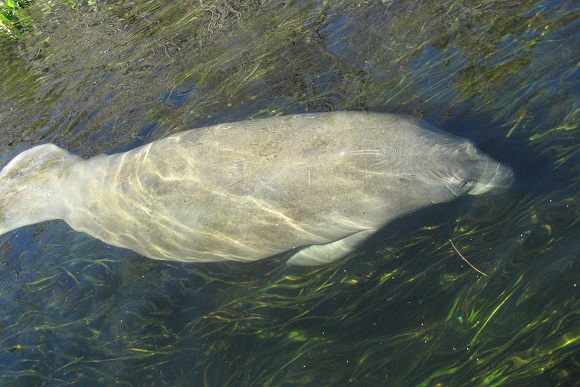 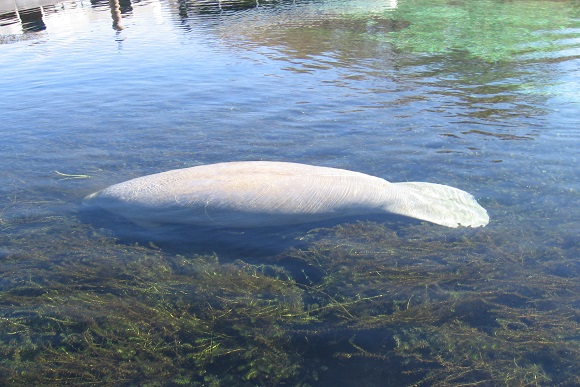