Florida has a rich diversity of snakes and other reptiles which play an interesting and vital role in Florida's complex ecology. Our 44 species of native snakes are found in every conceivable habitat, from coastal mangroves and saltmarshes to freshwater wetlands and dry uplands, and many species thrive in residential areas. However, there are just a few species that are commonly seen in developed area, although any snake may occasionally be found in urban settings.

Snakes occupy a valuable place in Florida's ecosystem. For example, snakes help reduce rodent populations, which destroy crops and sometimes carry diseases which can infect people. Non-venomous snakes also consume venomous ones, and can help maintain ecosystem balances. Venomous snakes are also beneficial; for example, some rattlesnake species have been reported to consume ticks in their native ranges.

Only six of Florida's 44 snake species are venomous: the eastern coral snake, the southern copperhead, the cottonmouth, the eastern diamondback rattlesnake, the timber rattlesnake, and the dusky pygmy rattlesnake.  Most Florida snakes are harmless and beneficial and remove extra rodent populations.  Even the venomous species are not particularly dangerous unless stepped on or otherwise provoked.

Most snakes you encounter are most likely to be non-venomous. By recognizing common non-venomous snakes and understanding something of their habits, you can take a more relaxed attitude toward them and appreciate them as an integral part of Florida's wildlife.

Check out this video to learn more about our state’s many snake species and what to do when you encounter them.

What to do if you see a snake? 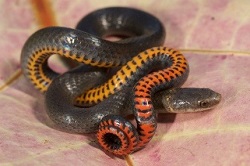 What should you do when you come upon a snake? Just stand back and observe it. Snakes don't purposefully position themselves to frighten people. They'd much rather avoid encounters and usually will flee. You can try to figure out what kind it is by using these articles. Some snakes, such as the Eastern indigo snake, are designated as endangered or threatened species and are protected.

There is no good reason to kill a snake except in the unlikely situation of a venomous snake posing immediate danger to people or pets. Snakes usually bite people only if they are molested; it's their only means of self-defense. Even a venomous snake in the woods or crossing the road poses no threat and should be left alone. Also, most larger snakes travel in large areas, so one you see in your yard today may be far away tomorrow.

The frequent sighting of snakes near dwellings or out-buildings may indicate the presence of rodents. Removal of brush, lumber or other debris accumulations will discourage both rodents and snakes. Rodent food sources like chronically spilled bird seed under feeders or pet foods scraps should also be policed regularly.

Venomous reptiles may only be possessed under license, and specific laws are in effect for handling, caging, and transporting them.