In the next 50 years … What's at stake for Florida? 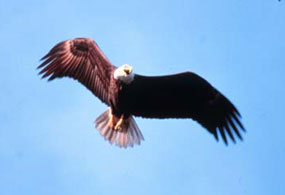 The economic downturn has changed the speed of development in Florida from that of a hare to a tortoise. Nevertheless, like the storybook tortoise, development plods on. And as the hare did, Floridians could learn a lesson from the resolute, slow-moving turtle. Determination also may work to the advantage of Floridians.

The current development lull may be the opportunity to put careful and purposeful thought into creating a plan on how the state is developed, with a better future for Florida's people and wildlife on the winning side of the finish line.

A few years ago, 1000 Friends of Florida released a report that indicated how Florida's landscape would look 50 years from now, based on the trend at that time of booming development and growth. The report predicted that in 50 years, Florida's population would be 36 million residents - double what it is now. About 7 million additional acres of land, equivalent to the state of Vermont, would be converted from rural and natural uses to urban uses. Nearly 3 million acres of agricultural lands and 2.7 million acres of native habitat would be claimed by roads, malls and subdivisions.

"It was predicted that natural habitats could become islands in a sea of development," said Dr. Thomas Eason, deputy director of the Division of Habitat and Species Conservation for the Florida Fish and Wildlife Conservation Commission (FWC). "Corridors for some animals to move about the state would be cut off, and there might not be enough land for some species to exist without direct management actions." 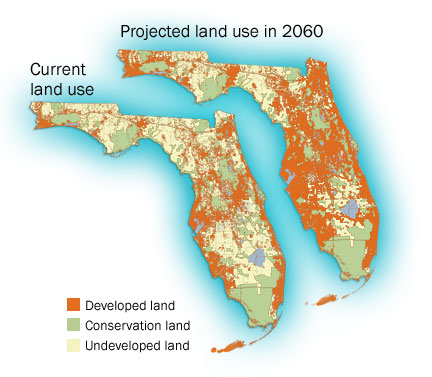 According to the predictions made in 2006, the areas where black bears, deer and wild turkeys live could decrease by more than 2 million acres. Gopher tortoises, a threatened species, could lose a fifth of their existing range. Burrowing owls, a species of special concern, could lose an additional 25 percent of their current habitat.

"Fishing, hunting, bird-watching, all kinds of outdoor activities, which brought many of us to Florida in the first place, would be greatly diminished. This affects our quality of life and our economy," Eason said.

Through good and bad times, Floridians have demonstrated a growing concern for the state's wildlife. Because it ultimately benefits people, conservation is a common denominator for many Floridians - even those who do not consider themselves outdoor enthusiasts.

Since 1972, residents in 30 Florida counties voted to tax themselves to preserve important local habitats, raising more than $2 billion to purchase approximately 375,000 acres of conservation lands.

Even now, with a weakened economy, 67 percent of Floridians support continued funding of Florida Forever - a plan that established a state-funded conservation and recreation lands acquisition program.

Due to the determination of so many Floridians, species that were once in jeopardy have rebounded. There are more bald eagles, peregrine falcons, Florida black bears and Florida panthers than there were 50 years ago.

"This is a chance to take advantage of our current situation and make lasting changes in how we develop as a state and interact with our natural world," Eason said.

Prior to the downturn, predictions indicated a grim future for Florida's wildlife, but like the unforeseen foreclosures and bank bailouts, nothing is for certain. Florida has bounced back from past recessions and experienced rapid growth that far exceeded previous expectations. It is Floridians who will determine if, at the end of the road, there will be a continuous expanse of subdivisions spread from coast to coast, or vibrant communities, linked by a green infrastructure that protects open space, farmland and wildlife.

"No matter what is happening with our economy, we must remember to remain diligent and determined in our efforts to conserve fish and wildlife for ourselves, and for future generations. In the end, we'll come out better on the other side if we do what is right for people and our natural resources," Eason said.

Some of Florida's best strategies to give wildlife a chance to thrive include: