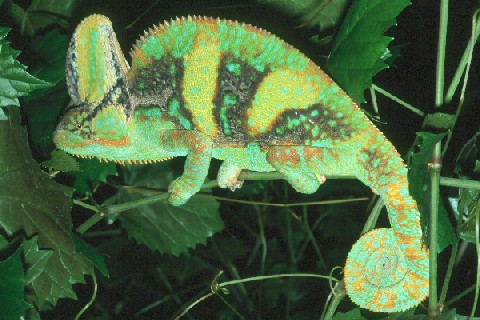 Established status: Species are present and breeding but for less than 10 years.

Threats to Natives: Unknown, but could compete for insect prey with native lizards and potentially prey on smaller lizards.

This species is native to the southwestern coastal regions of Saudi Arabia and western Yemen, where it inhabits mountainous coastal regions, inland river valleys, and agricultural lands where there is more moisture. In a 1-year period, >100 individuals of all size classes (including hatchlings representing several clutches) have been captured at 1 site in Ft. Myers (Krysko et al. 2004). Males reach 61 cm (24 in) total length, but females are only half as large. The male has a small spur on the heel of the hind foot, and the casque on back of the head is taller than that of a female. Coloration is highly variable and changes rapidly depending upon environmental conditions and the mood of the individual. Males typically have vertical body bands of bright gold, green, and blue mixed with yellow, orange, or black. Females are typically light green with a mottled pattern of white to gold spots on the body and light blue on the dorsal crest. In captivity, 30-60 (up to 85) eggs are typically laid per clutch, and 3-5 clutches may be laid annually. Females are sexually mature at ca. 5-6 months old, and a female that is receptive to breeding will often develop bright blue spots (Fife 1999). In the presence of males, gravid females change from light green to almost black with bright mustard and turquoise markings. Chameleon eggs often go through a diapause, or rest, period, and they typically take 6-8 months to hatch (Fife 1999). The vacant lot where the population was first established has been heavily collected, but the population has probably expanded into the adjacent neighborhood.