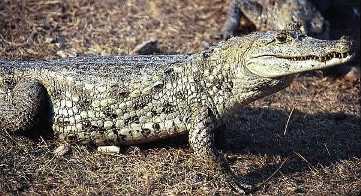 The native range of the spectacled caiman extends from southern Mexico to northern Argentina, where it may attain lengths of over 2.4 m (8 ft). South Florida specimens were released or escaped from the pet trade and are typically less than 1.8 m (6 ft) long. Breeding populations occur in localized areas of Dade and Broward counties, where they inhabit freshwater marshes, heavily vegetated ponds and lakes, and canals. This "small" crocodilian is secretive but is feisty when cornered. The caiman can be differentiated from native crocodilians by a curved bony ridge across the moderately sharp snout just in front of the eyes. Hatchlings are banded with very dark brown on a dark olive ground color, and the color darkens and the pattern obscures as they grow. It is susceptible to cold weather, and its northern expansion is limited by occasional freezes in south Florida (Bartlett and Bartlett 1999). Extirpation of the caiman population at Homestead Air Force Base, Dade County, was begun in 1977 (Ellis 1980) but caimans are still breeding there (L. J. Hord, FFWCC, Okeechobee, personal communication). In 2001, a nest of 41 eggs was collected (39 hatched) and 2 adults were killed near the junction of Levee No. 67A and Canal No. 123 (Holiday Park), Broward County (L. J. Hord, personal communication).