Research on Distribution and Biology 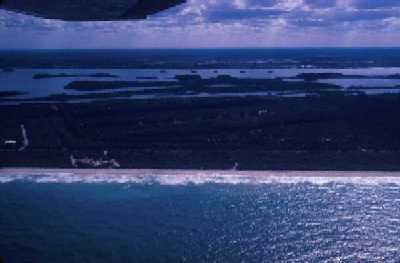 From December through March, right whale mothers migrate to the warm protected waters off Florida and Georgia to have their calves, Fish and Wildlife Research Institute (FWRI) researchers fly aerial surveys to locate the whales. Approximately 60 surveys are flown each calving season; each survey lasts approximately six hours. Surveys are flown in a small, twin-engine plane at an altitude of 1,000 feet to distances of up to 30 miles offshore. The primary mission of these surveys is to locate right whales within and adjacent to the Southeast Critical Habitat and pass that information on to mariners. See Early Warning System and Communications Network. 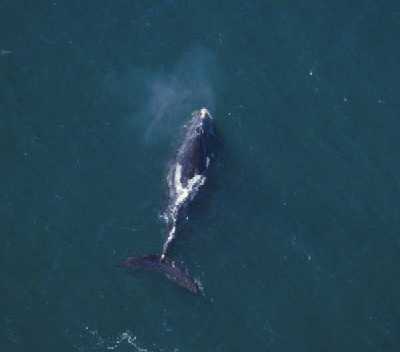 Each right whale has a unique and distinct pattern of markings on the top of its head. This hardened skin is called "callosity." Callosity grows on the right whale in many of the places where humans have hair: over the eyes, on the chin, along the upper lip, and on top of the head. The callosity is covered with small, white, crab-like animals called "whale lice" that make the callosity appear white.

Researchers at FWRI use the following methods to keep track of whales:

The ability to identify individual whales allows researchers to collect an entire life history of each right whale and to keep track of their movements and associations with other whales. In the 1980s, photo-ID allowed researchers to determine that the whales sighted in northern areas, such as Cape Cod Bay, the Bay of Fundy, and the Great South Channel, were the same whales migrating to the waters of Florida to have their offspring. Using the same photo-ID technique, researchers discovered that whale number 1133 traveled from Cape Cod Bay to Norway and back again in one year. 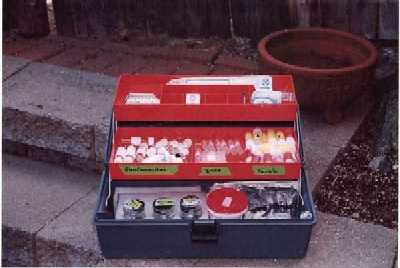 FWRI researchers work under permits issued by the National Oceanic and Atmospheric Administration (NOAA); these permits allow researchers to approach and dart individual right whales while in the Southeast U.S. The purpose of this research is to obtain small (3 cm) punch biopsy samples of right whale skin to be used in genetic analyses. These small samples can be used to determine information such as the paternity of a calf, relatedness, and the genetic variability of the population. Approximately 500 right whales comprise the North Atlantic population, and over 260 individuals have been biopsied to date. The small population size makes it an ideal population to study genetically. Scientists in Canada and the United States are working overtime to determine why the population continues to remain small. Studying the genetic variability of the population allows researchers the ability to determine if factors other than habitat loss, human induced mortality, or limited prey resources caused by shifts in climactic trends may be contributing to the slow recovery of the population.