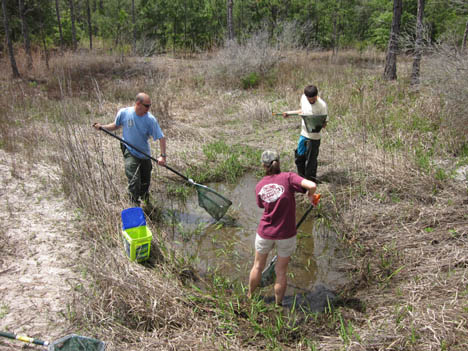 The Fish and Wildlife Research Institute is conducting a study to determine the distribution and status of five winter-breeding amphibian species in Florida – the frosted flatwoods salamander (Ambystoma cingulatum), the tiger salamander (A. tigrinum), the striped newt (Notophthalmus perstriatus), the gopher frog (Rana capito) and the ornate chorus frog (Pseudacris ornata). All of these species breed in isolated, temporary wetlands that lack predatory fish and are situated in either xeric (well-drained) or mesic (moderately moist) upland habitats (primarily sandhill or flatwoods). Recent observations (since 2000) and limited surveys indicate that many of these species are missing from historical locations, and the frosted flatwoods salamander has not been documented in peninsular Florida since 1998. This study will determine the current distribution, population trends and possible reasons for the declines in these species’ populations on public lands in the northern peninsula. This information will help FWC scientists develop management strategies for reversing declines in these species.