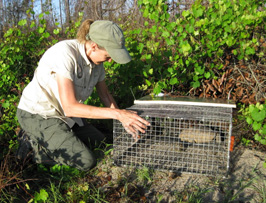 Fish and Wildlife Research Institute (FWRI) biologists conducted a study in 2009 to gather information on long-term gopher tortoise (Gopherus polyphemus) population dynamics, burrow distribution and habitat use within a pine (Pinus elliottii and P. palustris) plantation at Grove Park Wildlife Management Area in Alachua County. Researchers previously conducted mark-recapture surveys – a technique in which animals are marked and recaptured over time – at this site in the 1980s, along with a follow-up survey in 1992. The approximately 66-hectare (163-acre) study area is a mosaic of moderately drained and poorly drained soils and has a history of clear-cutting and replanting, allowing researchers to study the effects of intensive forest management on tortoise populations.

FWRI biologists located gopher tortoise burrows during late April and early May 2009, and trapped tortoises in pitfall or wire traps from May to July. They captured 52 tortoises at the study site and four others nearby. Seventeen (33 percent) of the tortoises had been marked with holes drilled through the edge of the carapace during earlier studies, including a male marked as a mature adult in 1982. Researchers found most (88 percent) of the marked individuals within 200 meters (656 feet) of the location at which they were captured in earlier surveys, despite forest management-related habitat changes. Only 8 percent of the 211 tortoises marked during previous studies were recaptured in 2009. Biologists recorded a 4 percent recapture rate for tortoises marked when immature, 10 percent for adult males and 21 percent for adult females. Drill marks held up relatively well in adult tortoises but were difficult to discern in some tortoises marked as juveniles. Biologists noted different size and sex class distributions of tortoises captured in 2009 from those observed from 1981 to 1987 and 1992, primarily because they captured fewer juveniles in 2009. This follow-up survey indicated viable gopher tortoise populations can persist on sites undergoing intensive forest management. It also further substantiated tortoise use of windrow berms, a forestry management practice in which long narrow piles of vegetation and soil are created to prepare a site for planting; ecotones, which are transitional zones between two habitat types; and relatively well-drained soils.

Access the publication from this study: Long-term population dynamics of gopher tortoises (Gopherus polyphemus) in a pine plantation in northern Florida.