The pine savannas and wet prairies of the Florida are dotted with shallow, isolated, seasonally dry ponds and swamps. These wetlands are often known as “cypress domes”, “cypress stringers”, or “depression marshes” and serve as critical breeding sites for many of our native amphibians, including the flatwoods salamander. Historically, these wetlands habitats were maintained in an open and grassy condition by frequent lightning-ignited fires that would burn through wetlands in the late spring or early summer when they are regularly dry. Large wetland trees (e.g. pond cypress) would be unharmed but small woody shrubs would be killed back, allowing for the proliferation of a diverse suite of herbs and grasses throughout the wetland basin. Dead grasses and fallen leaves would regularly burn away, leaving the underlying soil free of organic detritus. Due to modern human’s interruption of the natural fire cycle, fires no longer burn across our pineland landscapes during the time of year or under the dry conditions that seasonal wetlands would burn naturally. Prescribed fires are intended to simulate natural fire, but they are too often conducted in winter or early spring when wetlands are full resulting in fires stopping at their edges. Decades of winter burning has systematically excluded fire from wetlands, allowing woody trees and shrubs to take over our shallow wetlands. This results in shading of the basins, reduction of the hydroperiod, and the organic infilling of muck. The sun-loving herb and grass communities that once dominated have all but disappeared, and along with them, our native amphibian communities.

In response to this growing problem, FWC has partnered with the U.S. Forest Service, the Nature Conservancy, and the U.S. Fish and Wildlife Service to restore critical wetlands on public lands. This State Wildlife Grant-funded project will restore a minimum of 45 wetlands across the Florida panhandle and southern Georgia using prescribed fire and a variety of shrub removal methods. The wetland vegetation response and the adult and larval occupancy of five species of rare and imperiled amphibians will be monitored at restoration sites pre- and post-treatment to determine effectiveness. In Florida, we will complete a study comparing the amphibian and plant response to light and heavy mechanical wetland restoration techniques to guide future restoration efforts. Light mechanical restoration treatments will consist of hand crews carefully cutting and hauling non-desirable shrubs and trees. Cut stumps will be carefully painted with herbicide to prevent resprouting. Heavy mechanical restoration will be conducted in wetlands that are so overgrown that they no longer support flatwoods salamander populations. In these instances, heavy equipment will be used to remove the shrubby midstory and scrape away the underlying muck layer allowing wetland herbs and grasses to regenerate.

Historically, most seasonal wetlands within the longleaf pine were kept open and grassy by early summer fires ignited by lightning. Wetlands in this condition have become extremely rare. 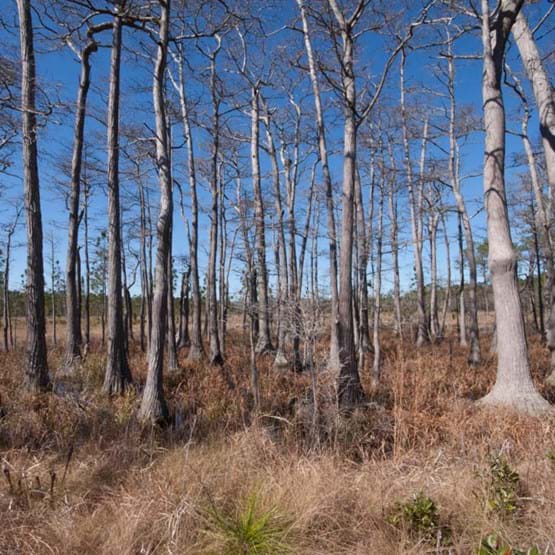 A badly fire-suppressed wetland in the Apalachicola National Forest has become choked with woody shrubs. Surveys indicate that wetlands in this condition support few or no amphibians. 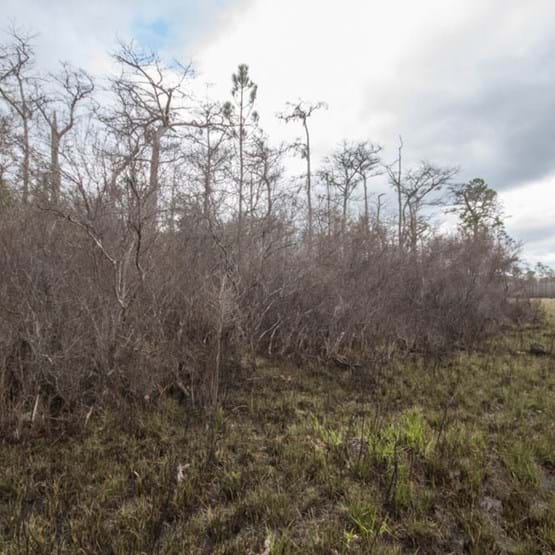 Recently cut stumps of undesirable hardwood shrubs are painted with a blue herbicide to prevent them from resprouting. 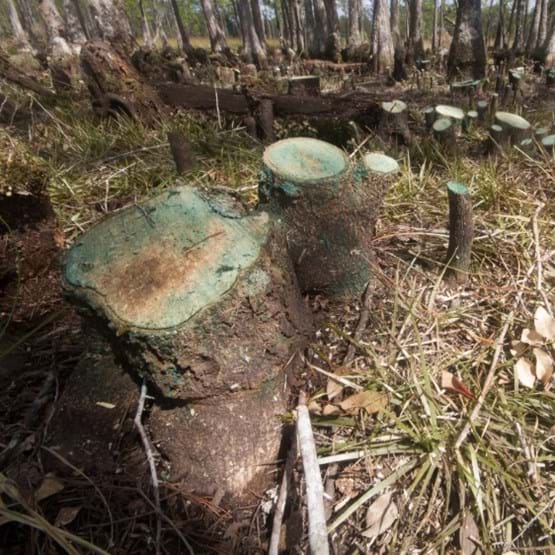 Trunks and limbs of undesirable hardwoods are piled in the uplands around ponds where they can be consumed by the next prescribed fire. 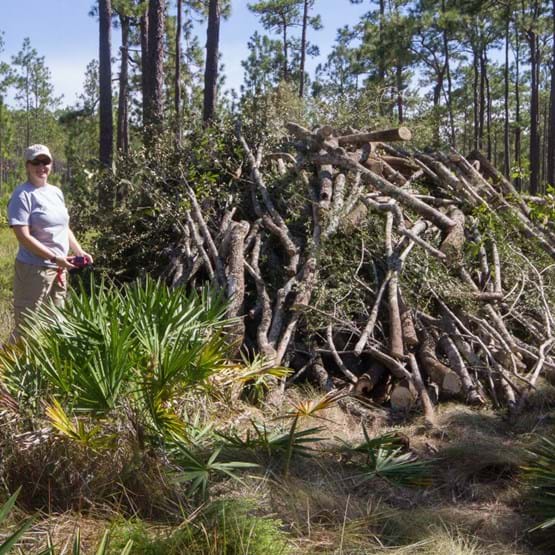