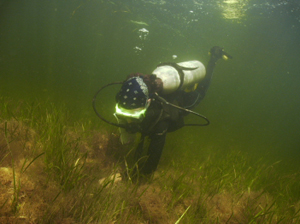 To assess the status of bay scallops in Florida waters, Fish and Wildlife Research Institute (FWRI) scientists conduct adult population surveys each June along the state's west coast. Researchers monitor 10 sites from Pine Island Sound to St. Andrew Bay. At nine of the 10 sites, they survey 20 stations (10 stations at the other site) located in seagrass beds in depths up to 10 feet. At each station, researchers deploy a 300-meter (984.3 feet), weighted transect line. Two divers – one on either side of the line – each count all scallops within a meter-wide (3.3 feet) area along the line, for a total survey area of 600 square meters (1,968.5 square feet). 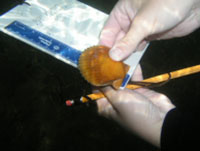 Results of the adult population monitoring data can be found in the most recent 2015 Florida Bay Scallop Annual Report. 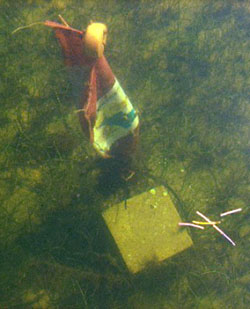 They anchor citrus bags stuffed with black mesh to a block (pictured left) to collect juveniles. The collectors are deployed every month in the nearshore, grassy habitats found along Florida’s Gulf coast. They simulate grass blades, and juvenile bay scallops, called spat, settle out of the water column and attach to collectors using small fibers called byssal threads.