Mercury in the Environment

This article provides background information about mercury, including its sources, how it accumulates in fish and wildlife, and what risks it poses to wildlife and human health.

Mercury has been acknowledged as an environmental pollutant for several decades.  In the 1950s, extensive fish contamination occurred in Japan after industrial releases of mercury into Minamata Bay. Many who ate contaminated fish from that region died. Some people who ate the contaminated fish produced children who suffered from severe developmental disabilities and physical deformities.  Further studies have implicated mercury as a neurotoxin (a compound that negatively affects the central nervous system) in humans.  The developing nervous system of children and fetuses is most at risk from mercury poisoning.  Mercury poisoning can also adversely affect wildlife species, such as wading birds, alligators, raccoons, and otters, that consume fish.  In the late 1980s, there was great concern for Florida panthers that ate raccoons in the Everglades. The Florida panthers were accumulating mercury from the raccoons that they consumed.  Continued monitoring of panthers has not revealed toxicologically significant levels of mercury in panthers since that time.

Many natural and human-related (anthropogenic) sources of mercury exist in the environment. In nature, the many ways mercury is released include dust storms, forest fires, volcanic eruptions, and breakdown of the earth's crust by wind and water. Mercury can get into the air from deposits of ore containing mercury or through human activities.  The burning of fossil fuels (coal and petroleum products) to produce energy and the incineration of waste items containing mercury, such as certain types of batteries and fluorescent light bulbs releases mercury into the air.  Other industrial processes, including mining and smelting, chlorine and alkali processing, cement production, and pulp and paper processing, can release mercury into the environment.

Mercury that contaminates fish and wildlife does so through a complicated biochemical process that begins with the emission of mercury into the atmosphere where it can remain for years before returning to the earth's surface with rain or as dry fall.  Once deposited on land, mercury ends up in runoff, where it enters our lakes, rivers, marshes, and coastal ecosystems.  Once in the water, mercury binds to soils and particles and settles to the bottom of water bodies.  Microorganisms in the soil and water (primarily sulfate-reducing bacteria) convert mercury into a more toxic form called methyl-mercury.

Bioaccumulation occurs because animals excrete mercury slowly and because top-level predators consume high numbers of contaminated prey items.  By the time methyl-mercury has reached a top-level predator, such as a largemouth bass (freshwater) and king mackerel (saltwater), it may have increased by as much as a million times from bacteria to fishes. 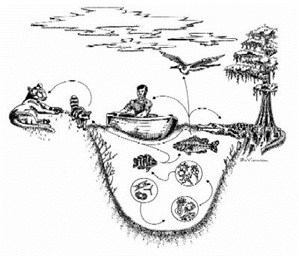 Methyl-mercury is formed by microscopic bacteria in lake and wetland sediments.  Bacteria either keep methyl-mercury in their cells or excrete it into the water where it is taken up by other microscopic plants and animals.  Biomagnification occurs when larger organisms consume the microscopic plants and animals and take up all of the methyl-mercury in the small organisms.  This process is repeated many times up the food chain until reaching fish at the top of the food chain. Top-predator fish accumulate concentrations of methyl-mercury high enough to be potentially harmful to humans and fish-eating wildlife.  The same processes occur in both freshwater and marine waters of Florida. 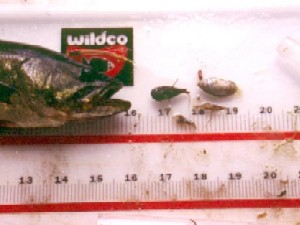 FWC and other state, university, and federal researchers are conducting studies to better understand the cycling of mercury in the environment, to identify factors that lead to high mercury concentrations in fish, and to determine sources of mercury in Florida.