Some fish contain mercury and other contaminants, which can be harmful to human health. Fish-consumption advisories provide citizens with guidelines on how much fish they can safely eat to minimize their exposure to contaminants.

Florida's freshwater and marine fish are generally considered safe to eat. However, certain fish can be potentially unhealthy to eat because those fish can take up contaminants from the water they live in and from the food they eat. Fish may contain different levels of contaminants based on their location, size, age, length of life, and feeding habits. Although pesticides, algal toxins, and other manmade compounds are of interest to health officials, mercury is currently the contaminant of greatest concern in Florida's fish. 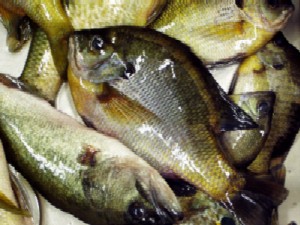 Many Florida waters have been tested for mercury levels in fish. For these, the DOH website offers regularly updated consumption advisories containing specific advice about eating fish from Florida's fresh and marine waters. The DOH can also be contacted through regular mail or by telephone:

Consumption advice about commercially caught fish sold in supermarkets and restaurants can be found in the joint Food and Drug Administration (FDA) and Environmental Protection Agency (EPA) online publication, Joint Federal Advisory for Mercury in Fish. Advisories from other states and tribal agencies are also available online.

Certain species have high contaminant levels and should be avoided, while authorities advise limited consumption of other species. Mercury testing in Florida freshwaters has focused on sportfish species, including largemouth bass, bluegill, redear sunfish, warmouth, spotted sunfish, redbreast sunfish, black crappie, catfish, and some exotics such as oscars, butterfly peacocks, and Mayan cichlids. Much of the testing has focused on largemouth bass since their feeding habits and long lifespan create the greatest potential to accumulate high levels of mercury. Some species such as bluegill, redear sunfish, redbreast sunfish and spotted sunfish are generally low in mercury throughout the state; however, it is a good idea to review the current fish consumption advisory for specific advice on these species.

Mercury testing of fish from marine and estuarine waters of Florida has included over 100 species, representing all major groups from primary consumers to apex predators. Apex predators are fish at the top of the food chain. These species include many popular sportfish collected from state waters. The majority of marine and estuarine fishes examined contained low levels of mercury, but levels in individual fish varied greatly within and among species. Examples of species with low levels include striped mullet, Florida pompano, sheepshead, common dolphin, gray snapper, gulf flounder, and southern flounder. Many other species also contain low mercury levels. The current fish consumption advisory provides specific advice regarding Florida marine fishes.
FWC conducts sampling and research programs to further understand the significance of mercury in Florida's aquatic environments and to determine the range and extent of contamination in fish. These results will be used to update fish consumption advisories.  Please refer to the DOH website for periodic updates of information about new and existing water bodies. 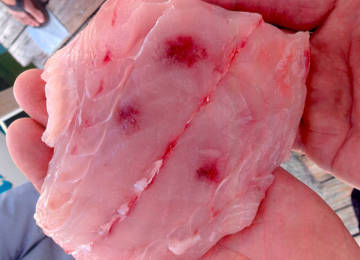