Results from the first three years of the Gulf Reef Fish Survey.

What is the Gulf Reef Fish Survey?

Since April 2015, recreational anglers who fish from private boats on the Gulf coast of Florida have been asked to sign up for the Gulf Reef Fish Survey. Signing up is required to legally harvest red and vermilion snappers; gag, black and red groupers; gray triggerfish; and amberjack species.

The purpose of the new Gulf Reef Fish Survey is to provide data that are more precise and provide state and federal agencies responsible for managing reef fish greater flexibility when making decisions that impact recreational anglers in Florida.

How was the Gulf Reef Fish Survey developed?

The new survey is the result of years of collaboration between the state of Florida, regional and federal partners, and academic experts from across the country. The survey design was developed during a series of workshops hosted by Gulf States Marine Fisheries Commission, which brought together researchers from all five states in the Gulf region, NOAA Fisheries, and statisticians with expertise in the field of survey design. 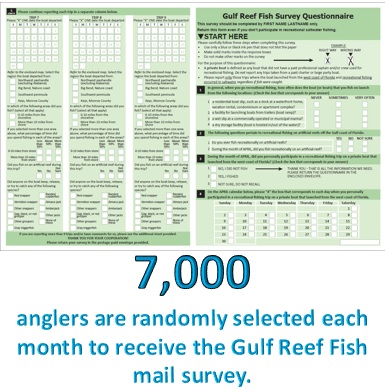 How does the survey work?

By signing up for the survey, an angler is eligible to receive a questionnaire in the mail which asks about recent fishing activity. Each month, responses received from the mail survey are used to estimate the numbers of recreational trips taken on the west coast of Florida to fish for Gulf reef fish species.

In addition, anglers returning from trips where they fished for Gulf reef fish may be interviewed by FWC biologists in the field. During interviews, biologists collect information on the numbers and types of fish landed and released, as well as the size, weight, and age of harvested fish. These data are used in combination with fishing effort from the mail survey to estimate the total numbers of fish harvested and released by species. 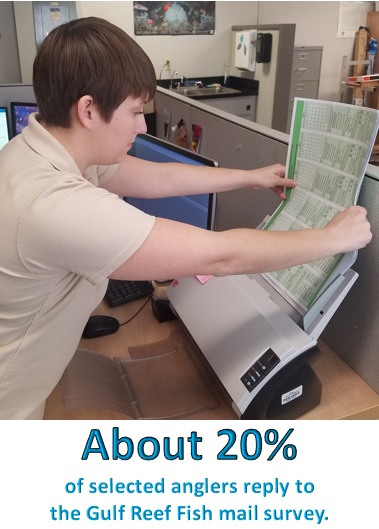 How is the Gulf Reef Fish Survey progressing?

The Gulf Reef Fish Survey has been pilot tested in Florida over the past three years and has run side-by-side with the existing Marine Recreational Information Program (MRIP). The MRIP survey serves as the primary source of recreational fishing statistics for a variety of important species in Florida, including spotted seatrout, red drum, and common snook. By working collaboratively with NOAA Fisheries, the new Gulf Reef Fish Survey produces data that are complementary with MRIP, and some information collected as part of the MRIP survey are also incorporated into the catch estimates for reef fish generated by the Gulf Reef Fish Survey.

The Gulf Reef Fish Survey is providing reliable data which helps monitor the recreational fishery for reef fish in Florida. The new mail survey provides fishing effort estimates on a monthly frequency (as opposed to bi-monthly), and provides a direct estimate of the number of recreational trips that target reef fish in state and federal waters. The mail survey is also providing valuable information on the amount of fishing that takes place on artificial reefs.

For important managed species, including red snapper, gag and red grouper, the Gulf Reef Fish Survey is producing catch estimates with a higher degree of certainty (i.e. the estimates are more precise). With more precise estimates, fishery managers can have greater confidence that the seasons, size limits and bag limits for a given species are effective and that harvest levels are sustainable. 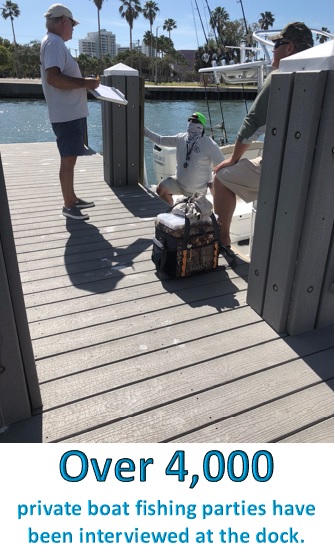 Experts give the Gulf Reef Fish Survey a favorable review

The Gulf Reef Fish Survey was formally reviewed in 2018 by a team of statisticians from across the country that are experts in survey design. During the review, researchers from the Fish and Wildlife Research Institute (FWRI) presented details of the survey design, methods and procedures, and results from the pilot testing. In their final report to FWC, the reviewers concluded that the approach taken to monitor recreational fishing in Florida is appropriate and that the methods are statistically sound.

The reviewers also provided valuable suggestions for ways FWC may improve upon the current survey. Their greatest concern was the low response rate for the mail survey. Currently, 20% of anglers who receive a Gulf Reef Fish Survey in the mail fill out the questionnaire and return it to FWC; compared to similar scientifically designed mail surveys that obtain response rates as high as 30-40%. One possible explanation is that more than half of new survey subscribers report to FWC they are unlikely to fish for reef fish in the Gulf and may not need to be signed up for the survey. To address this, the reviewers suggested ways to ensure that when anglers purchase a saltwater fishing license and sign up for the survey, they are properly informed about the survey and whether it applies to the type of fishing they do. Another recommendation was to provide an option for anglers to respond to the survey online.

In response, researchers at FWRI and staff from FWC’s Divisions of Licensing and Marine Fisheries Management worked together to develop a plan for implementing many of the recommended improvements to the Gulf Reef Fish Survey.

In December 2018, NOAA Fisheries certified the Gulf Reef Fish Survey as a statistically valid method that may be used in stock assessments. FWRI staff will be working with statistical consultants in the coming months to determine how to best adjust historical estimates based solely on the general MRIP survey to be consistent with new estimates based on the integrated approach. 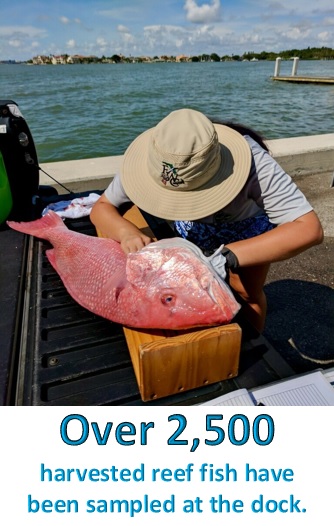 Can the data be used to monitor recreational landings in Florida?

The success of this collaborative effort is already paying off. In 2018 and 2019, the state of Florida is participating in a new pilot study which gives FWC’s Commission flexibility for managing the red snapper recreational fishery in both state and federal waters adjacent to Florida’s Gulf coast. The Gulf Reef Fish Survey will be used during this time to monitor recreational landings to ensure that the state is managing the recreational fishery within sustainable limits.

FWC is grateful to everyone who participates in the Gulf Reef Fish Survey. This survey would not be a success without support from recreational anglers who voluntarily return surveys in the mail and allow biologists to conduct interviews. If you receive one of our surveys in the mail, please fill out the questionnaire and return it to FWRI. It is important to return the questionnaire even if you did not fish during the month of the survey. If an FWC biologist greets you at a boat ramp or marina, the interview takes just a few minutes of your time. By participating in an interview for the Gulf Reef Fish Survey or the MRIP survey, you are making an important contribution to help preserve Florida’s recreational fisheries.