Blue Crab Research at the Institute

The Crustacean Fisheries subsection of the FWC’s Fish and Wildlife Research Institute (FWRI) has been working on several different blue crab projects to gather important biological and population data to assess the health of the fishery.

Most recently, crustacean researchers have expanded upon the 2006-07 Blue Crab Health Assessment. The parasitic dinoflagellate Hematodinium sp. causes one of the most common diseases in Florida blue crabs, known as “bitter crab.” This parasite has significant effects on blue crabs during stressful environmental events, such as high salinity and high temperature. To understand and manage the fishery properly, it is critical to understand the prevalence and role this disease has on natural mortality and fishery dynamics.

In 2011, researchers began biannual sampling to assess the prevalence of Hematodinium sp. in six regions of Florida: northwest, west coast, southwest, southeast, east coast, and northeast. Working with commercial crabbers, biologists collect approximately 75 blue crabs from each location. FWRI staff use two laboratory techniques to count the parasites present in the hemolymph (a bloodlike fluid) and muscle tissue of the crab. First, a sample of blood is taken from the leg of the crab and fixed to a slide. After the slide is stained, it is viewed under the microscope and parasitic cells are counted. From the same leg, a sample of blood is used for genetic analysis of Hematodinium sp. Researchers compare samples with a known amount of the parasite DNA to the newly collected samples. From those samples, they can determine the prevalence of the parasite within individual blue crabs.

To gain insight into the commercial blue crab industry, the FWRI Crustacean Fisheries group surveyed commercial crabbers who harvested during the 2009 season. The 25 questions focused on individual fishing effort, trap usage and loss, fishing location, and changes in catch. Of the 599 surveys mailed, crabbers completed and returned 233. In addition to quantitative data, crabbers included anecdotal information based on their many years of experience. Data will be compiled into a report available in 2013. 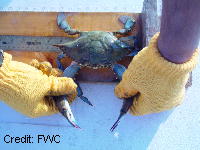 The FWRI Crustacean Fisheries group is developing a more precise method of aging blue crabs. In the future, researchers will use the new method to produce a more accurate stock assessment.Currently, researchers estimate the age of blue crabs based on the width of the shell, or carapace, measured from spine to spine; they identify an older crab by its larger carapace. The complexity of growth in crustaceans makes this method unreliable. Crustaceans shed their shells as they grow in a process called molting. When a crab molts, it loses all hard parts that may have indicated its age.

Blue crabs grow and molt based on environmental conditions, so crabs of the same age can vary in size. With no age markers such as otoliths (bony sensory organs in fish that play a role in hearing), researchers can instead use a pigment in the crab's eyestalk, called lipofuscin, to determine age. Lipofuscin accumulates with age in the nerve tissue of the crab, making a great age marker.

Before researchers can assign an age to a crab, they must compare the amount of lipofuscin with the amount in crabs of a known age. To gather data, researchers collected a cohort of juvenile crabs from Tampa Bay. The crabs are being raised in ponds mimicking the Tampa Bay environment, located at the FWRI Stock Enhancement Research Facility. Every three months, crabs are analyzed for the amount of lipofuscin; these data will be used to make a calibration curve. With this calibration curve, researchers can determine the age of the crabs collected from various locations in Tampa Bay.

With this information, researchers hope to more accurately assess the population of blue crabs in the Tampa Bay area. This includes determining a maximum age, the demographic of blue crab landings, and the age crabs return to the estuary from offshore. Eventually, a similar process could be applied to assess the blue crab stock throughout the state of Florida.

Other blue crab research by the Crustacean Fisheries group has included the following:

Additional Information
Glossary of Crustacean Terms
View the crustacean glossary for definitions of terms used in this article.