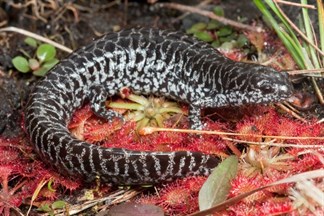 The Frosted Flatwoods Salamander (Ambystoma cingulatum) and the Reticulated Flatwoods Salamander (A. bishopi) depend on isolated herbaceous ephemeral ponds situated within longleaf pine savannas in order to complete their life cycles. Adults migrate from upland sites to breeding sites on rainy nights from October – December. In 2009, the United States Fish & Wildlife Service amended its listing of the flatwoods salamander to include the frosted flatwoods salamander as a threatened species, and the reticulated flatwoods salamander as an endangered species.  Loss and alteration/degradation of habitat are considered the main causes of population declines.

Optimal breeding ponds are characterized by open canopies and dense herbaceous vegetation.  The presence of basal rosette-forming herbaceous species such as pipeworts (Eriocaulon spp), witchgrasses (Dichanthelium spp.), and yelloweyed grasses (Xyris spp) are optimal for egg deposition.  Additional microhabitat requirements such as the vertical structure provided by the culms of beaksedges (Rhynchospora spp.) and fleabanes (Erigeron spp.) are important, and perhaps function as refugia for larvae.  These plants typically occur in the ecotone between the wetland and surrounding upland wiregrass savanna.  Adult salamanders and recent metamorphs have also been observed using wiregrass (Aristida stricta) and other graminoids in these ecotones.

Substrate and water depth are other limiting factors in breeding habitat suitability. In Apalachicola National Forest, flatwoods salamanders were captured in quadrats containing low amounts of detritus.  In addition, the presence of concave micro-depressions, especially those with dense vegetative cover, appear to be preferred.  Flatwoods salamander larvae also prefer relatively shallow water and did not capture any larvae at depths greater than 25cm.

All life stages are of the flatwoods salamander are clearly tied to the herbaceous ecotones surrounding these ephemeral ponds, but there has been little quantitative research conducted on their vegetative characteristics, especially with regard to how they respond to habitat management actions.  The purpose of this project is to quantify vegetation characteristics—such as plant species composition, abundance, and distribution—that have been qualitatively described for flatwoods salamander nesting habitat.  This document reports activities, and summarizes data collected during the first year of a 3 year monitoring project. This data can be considered the baseline “pre-treatment” condition.  That is, the condition the ponds are currently in before any management actions such as prescribed fire, and overstory/midstory thinning are applied.

Methods
At each of 18 ephemeral ponds, we established permanent vegetation monitoring points in order to quantify flatwoods salamander habitat characteristics with repeated measures.  One of the primary needs identified at the 7/12/16 project planning meeting was a quantitative description of the distribution within a pond of the herbaceous clumps preferred by flatwoods salamanders for egg-laying sites.  Because herbaceous nesting clumps are typically scattered and/or sparsely distributed within a wetland, a systematic, nonrandom grid analysis sampling method was used to locate herbaceous clumps (referred to hereafter as “nest sites,” though they need not have eggs present to be included).

In the lab, we overlaid a search grid consisting of 10m x 10m cells onto each pond including the perimeter ecotone using ArcGIS.  These grids, in addition to aerial photography, were subsequently imported into the mobile data collection platform Fulcrum.  In the field, we maneuvered throughout each grid using Panasonic FZ-A1 Toughpads (field tablet PCs equipped with GPS), and used Fulcrum for both navigation and data recording. This software platform allowed for real time synchronization in the field, and was excellent for tracking progress of the data collection effort by all team members.