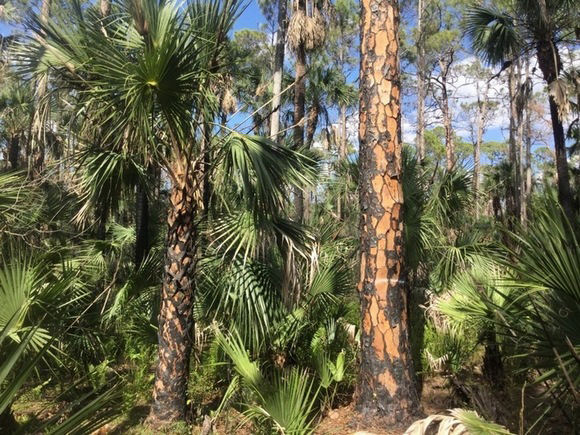 Introduction
Comparisons of recent and historical aerial photographs show numerous mesic flatwood sites in Florida have been invaded by cabbage palms over the last six decades.  It is generally thought that this may reflect effects of past logging activities, or may reflect changes in the fire regime. The historical fire regime in the southeastern USA has been altered since pre-European settlement.  In the mid part of this century, there were long periods of fire suppression and a general decrease in fire frequencies. During this period, cabbage palms may have become established in large numbers in flatwoods communities. However, the importance of fire to many ecosystems has been recognized for quite some time, and prescribed fire has been reintroduced as a tool for managing vegetation in many areas of Florida. If population increases of palms is indeed a result of fire exclusion, this suggests that there may be a stage in the development of the palm that is susceptible to fire which excludes it from the more frequently burned communities. However, the effects of reintroducing prescribed fires on cabbage palm populations are inconclusive.

The developmental stage in the life history of cabbage palms that is susceptible to fire is so short, and mortality is so low that no realistic fire frequency is likely to cause significant decreases in palm populations. High fire frequencies, therefore, appear insufficient to explain the rarity of cabbage palms in frequently burned plant communities in the southeastern USA, and reduced fire frequencies could not have caused observed cabbage palm invasions of flatwoods. It is more likely that recurring disturbances such as fire, logging, or hydrological alterations may promote dominance by species like the cabbage palm because other species often sustain more damage. This type of disturbance regime could lead to a species-impoverished, palm dominated system. 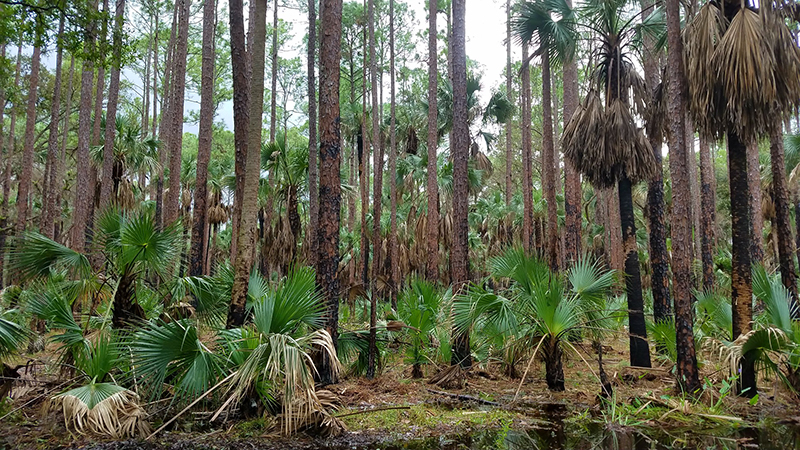 Therefore, the use of prescribed fire alone to control or reduce the encroachment of the cabbage palm is not an option for land managers in the SE. Mechanical thinning of the palm stand is a technique that has recently been used on public lands. However, the soil disturbance resulting from the use of heavy machinery to fell the trees has been problematic, and has often promoted invasion by weedy and/or exotic species. Harvesting of the apical meristem (aka the “heart”) is another mechanical option, but the technique can be laborious and time consuming, and is currently most often done in conjunction with palm thinning.

Chemical control by attacking the apical meristem with glyphosate herbicide is also effective, and special wands are available that can reach up to approximately 20 feet.

The goal of this study is to test two different mechanical and one herbicide treatments in addition to a control in order to develop best management practices for the cabbage palm community type. The project will involve long term monitoring of palm regeneration, as well as the response of the understory and herbaceous ground cover within test plots. The experimental treatments will be: 1) 100% clear cut (palms only) 2) 50% palm thinning 3) herbicide and 4) control.