Seagrasses are a vital part of the marine ecosystem..

Seagrasses are submerged flowering plants found in shallow marine waters, such as bays and lagoons and along the continental shelf in the Gulf of Mexico. A vital part of the marine ecosystem due to their productivity level, seagrasses provide food, habitat, and nursery areas for numerous vertebrate and invertebrate species. The vast biodiversity and sensitivity to changes in water quality inherent in seagrass communities makes seagrasses an important species to help determine the overall health of coastal ecosystems. Seagrasses perform numerous functions: 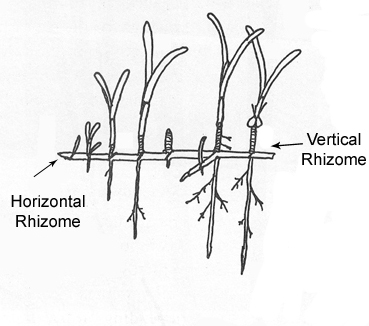 Stabilization: Ocean bottom areas that are devoid of seagrass are vulnerable to intense wave action from currents and storms. The extensive root system (see diagram below) in seagrasses, which extends both vertically and horizontally, helps stabilize the sea bottom in a manner similar to the way land grasses prevent soil erosion. With no seagrasses to diminish the force of the currents along the bottom, Florida's beaches, businesses, and homes can be subject to greater damage from storms.

Ecosystem support: Seagrasses provide food, shelter, and essential nursery areas to commercial and recreational fishery species and to countless invertebrates living in seagrass communities. Some fish, such as seahorses and lizardfish, can be found in seagrasses throughout the year, while other fish remain in seagrass beds during certain life stages.

Food: While some organisms, including the endangered Florida manatee and green sea turtle, graze directly on seagrass leaves, others use seagrasses indirectly to provide nutrients. Bottlenose dolphins are often found feeding on organisms that live in seagrass areas. Detritus from bacterial decomposition of dead seagrass plants provides food for worms, sea cucumbers, crabs, and filter feeders such as anemones and ascidians. Further decomposition releases nutrients (such as nitrogen and phosphorus), which, when dissolved in water, are re-absorbed by seagrasses and phytoplankton.

Nursery areas: The relative safety of seagrass meadows provides an ideal environment for juvenile fish and invertebrates to conceal themselves from predators. Seagrass leaves are also ideal for the attachment of larvae and eggs, including those of the sea squirt and mollusk. Much of Florida's recreationally and commercially important marine life can be found in seagrass meadows during at least one early life stage.

Habitat: While seagrasses are ideal for juvenile and small adult fish for escape from larger predators, many infaunal organisms (animals living in soft sea bottom sediments) also live within seagrass meadows. Species such as clams, worms, crabs, and echinoderms, like starfishes, sea cucumbers, and sea urchins, use the buffering capabilities of seagrasses to provide a refuge from strong currents. The dense network of roots established by seagrasses also helps deter predators from digging through the substratum to find infaunal prey organisms. Seagrass leaves provide a place of anchor for seaweeds and for filter-feeding animals like bryozoans, sponges, and forams.

Water Quality: Seagrasses help trap fine sediments and particles that are suspended in the water column, which increases water clarity. When a sea floor area lacks seagrass communities, the sediments are more frequently stirred by wind and waves, decreasing water clarity, affecting marine animal behavior, and generally decreasing the recreational quality of coastal areas. Seagrasses also work to filter nutrients that come from land-based industrial discharge and stormwater runoff before these nutrients are washed out to sea and to other sensitive habitats such as coral reefs.

Economics: Although seagrass is not a commodity that is directly cultivated in Florida, its economic value can be measured through other industries, such as commercial and recreational fisheries and nature and wildlife tourism, which rely on this habitat to survive. Since most of Florida's fishery species (approximately 70%) spend at least part of their life cycle within seagrass communities, seagrasses are vital to the survival of these fishing industries.