The Florida Keys National Marine Sanctuary Coral Reef Evaluation and Monitoring Project (FKNMS CREMP) sampling sites and stations were selected and installed in 1995. Originally 40 sites and 160 stations were selected for monitoring. The original 40 CREMP sampling sites were selected using a stratified, or layered, random sampling procedure based on the U.S. Environmental Protection Agency's (EPA) Environmental Mapping and Assessment Program (EMAP).  Stratification, or the arrangement of the layers, was based on habitat type, with four main habitat types defined: nearshore hardbottom, patch reefs, offshore shallow reefs (roughly 10 to 20 feet of depth), and offshore deep reefs (about 30 or 50 feet deep). While sampling sites were selected in a random matter, stations were installed with the intention of monitoring specific aspects of the selected habitats. In 1999 three sites totaling 12 stations were installed and sampled in the Dry Tortugas as part of the FKNMS CREMP monitoring, for a total of 43 sites and 172 stations.

Prior to sampling in 2001 statistical analysis of previous CREMP data indicated that sampling effort could be reduced without significantly affecting the outcome of analyses; 55 stations and three sites were removed from the survey. One additional site with two stations was dropped prior to each of the 2006 and 2008 sampling events. At least two stations are surveyed at the remaining survey sites.

In 2008 there will be an additional six sites with two stations each installed and surveyed at patch reefs within Hawk Channel, several kilometers offshore, in order to provide additional monitoring for this diverse area. Hawk Channel sites will be selected as representative samples of their specific areas.

Off the coast of southeast Florida there are three linear reef structures running parallel to shore; an inner reef tract (at a depth of nearly 10 feet), a middle reef tract (about 35 feet deep), and an offshore reef tract (roughly 50 feet below the surface). Inside of the inner reef tract is a fairly continuous nearshore hardbottom community. The three reef tracts are separated by sand flats roughly 2,000 feet wide.

SECREMP sampling sites were selected as representative samples of the three reef tracts located off of southeast Florida. Station installation and the first surveys of these sites occurred in 2003. For Miami-Dade and Broward counties, one site was chosen from each of the three reef tracts, totaling six sites and 24 stations. In Palm Beach County the inner and middle reef tracts are less defined. Two sites totaling eight stations were selected from the offshore reef tract, and one site with four stations was selected from the inner tract/hardbottom habitat. An additional site, four stations, was set up off of Palm Beach County with the intention of monitoring the Acropora Cervicornis thickets that exist there.

In 2005, three additional survey sites were selected off of Martin County. The Martin County reef area is limited and generally found along one track parallel to shore. Two sites with eight stations were installed to conduct surveys using standard CREMP protocols and one additional site was installed with the intention of monitoring individual coral colonies, fate-tracking.

SECREMP survey stations were set up parallel at each survey site. There are currently 12 sites with 48 stations as part of SECREMP, and one additional site in Martin County setup for coral colony fate tracking. SECREMP sites are represented by blue diamonds on the map below.

The Dry Tortugas is an area of well-developed and varied reef structures, located some 60 miles west of Key West. The Dry Tortugas Coral Reef Evaluation and Monitoring Project (DRTO CREMP) is a survey of coral reefs located within the Dry Tortugas National Park, which covers about 100 square miles (1002) of marine habitat.

The DRTO CREMP was initiated in 2004 to provide a better understanding of temporal changes, or changes that take place through time, in reef communities occurring within the Dry Tortugas National Park. DRTO CREMP sites and stations were selected as representative samples of the coral reefs of the Dry Tortugas and with the intention of targeting certain coral species. Four sites totaling 13 stations were installed and first surveyed in 2004. All four of these sites are considered patch reef habitats for the purpose of CREMP. Two sites totaling five stations are shallow water habitats focused on monitoring acroporid stands, while the other two sites, four stations each, are located in slightly deeper water farther from shore.

One additional nearshore patch reef was added during each of the 2005 and 2006 surveys. In 2005 a two-station site was added off the southeast side of Loggerhead Key that focused on an Acropora cervicornis stand. In 2006 a site was added off the northwest side of Loggerhead Key. Because of extremely shallow depths this site it is not surveyed using standard CREMP methods. There are currently seven sites with a total of 23 stations surveyed as part of the DRTO CREMP, and one additional site surveyed using modified methods. DRTO CREMP sites are represented by red circles on the map below. 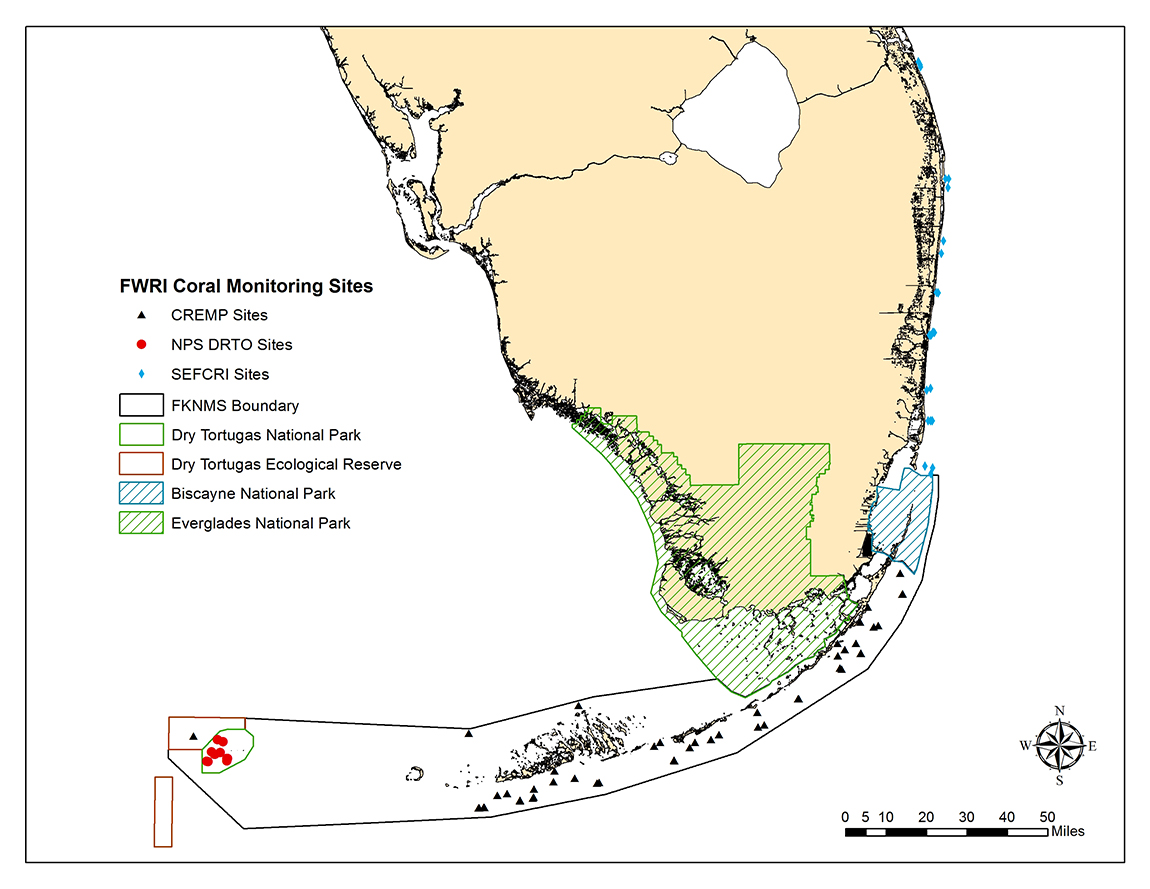