Trophy bass photo analytics relies on an object of known dimensions (A) to make measurements of a bass’s length (B), body depth (C), or cross-sectional area (D).

FWC researchers tested and verified the accuracy of the trophy bass photo analytics tool under “real-world” circumstances encountered by TrophyCatch. 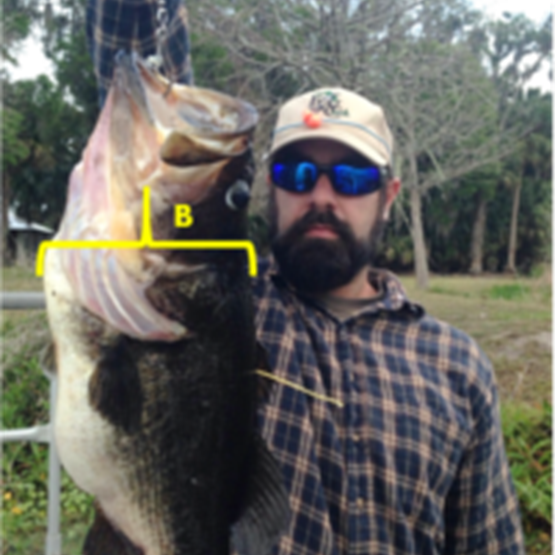 TrophyCatch relies on photo documentation of a bass’s weight for program qualification. Originally, the program required participants to photo document both weight and length of entrant bass to qualify for Lunker and Trophy levels, and Hall of Fame level bass required on-site verification by a Florida Fish and Wildlife Conservation Commission (FWC) biologist. Season two of the program transitioned to requiring only a single weight-documentation photograph for all three tiers of recognition to simplify the process. This shift reduced handling of bass, reduced their time out of water, and made it easier for anglers to participate. However, by lifting the requirement of length-documentation photos it left TrophyCatch biologists with less information to help verify reported weights of entrant bass.

Researchers begin investigating alternative methods of verifying length of and weight of trophy bass. They developed a technique referred to as “trophy bass photo analytics” where biologists use an object of known size in the photo (e.g., measuring tape or digital scale) to scale dimensions within the focus of the photo, which can then be applied elsewhere in the shot. Similar to existing equations that use length and girth to estimate a bass’s weight, trophy bass photo analytics allows biologists to measure a bass’s length, body depth, or cross-sectional area in a photo, and these values can then be entered into equations that estimate a bass’s weight.

FWC’s trophy bass photo analytics equations are based on nearly 200 bass that were photographed, weighed, and measured by biologists during 2014–2015. To make sure that these methods were applicable to bass of nearly all sizes, they included bass from 2.2–13.1 lbs; however, 65% of the bass were ≥ 8 lbs, since the project’s focus was to help verify weights of trophy bass.

Although the core process of trophy bass photo analytics has been the same throughout development, researchers have continuously honed and diversified the technique. It can be applied to variety of bass orientations, such as vertically or horizontally held bass or bass lying on a flat surface. As testing and refinement of these techniques verify accuracy standards, TrophyCatch biologists expect to increasingly rely on trophy bass photo analytics as a tool for the program.